Welcome to week eleven of Medieval Monday! I’m not sure where the time has gone that we’re almost done with our nature theme.

You can also join us on the Medieval Romance Lovers Facebook page at https://www.facebook.com/groups/1401384450126130/ for a complete list of all the authors who are participating including their links! Find us also on Twitter at #MedMonFall20!

Enjoy this next snippet from The Piper’s Lady as Garrick tries to get Lady Coira out of a tree!. Happy reading, my lovelies. 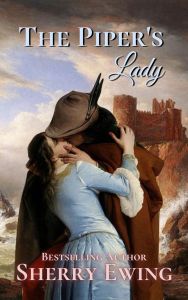 Coira began to scoot off the branch whilst attempting to keep her skirts in place. Garrick lifted his arms to catch her, but suddenly, Coira lost her grip on the tree. Another startled scream was torn from her lips as she began to fall.

Garrick once more captured the woman in his arms as they fell to the ground in a heap. In a repeat performance, he rolled to bear the brunt of the impact ’til she was captured beneath him. Hazel eyes stared at him in wonder, and his heart lurched in his chest.

The Piper’s Lady
The MacLarens (Book Three)
By Sherry Ewing

Be sure to join me next week for Medieval Monday for another snippet from The Piper’s Lady!

12 thoughts on “Medieval Monday with The Piper’s Lady”