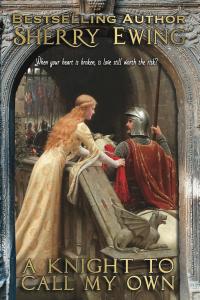 A Knight To Call My Own:
The MacLarens ~ A Medieval Romance

Bestselling author Sherry Ewing presents the continuing saga of the MacLarens in A Knight to Call My Own.

When your heart is broken, is love still worth the risk?

Lynet of clan MacLaren knows how it feels to love someone and not have that love returned. After waiting for six long years, she has given up hope of Ian’s return. Her brother-in-law, the Devil’s Dragon of Berwyck, is tired of waiting for her to choose a husband and has decided a competition for the right to wed Lynet is just the thing his willful charge needs to force her hand.

Ian MacGillivray has returned to Berwyck Castle in search of a bride and who better than the young girl who cared for him all those years ago. But Lynet is anything but an easy conquest and he will need more than charm to win her hand in marriage.

From the English borders to the Highlands of Scotland, the chase is on for who will claim the fair Lynet. The price paid will indeed be high to ensure her safety and even higher to win her love.

Ian ran his finger down one of her cheeks. She shivered in delight as her body naturally responded to the subtle caress. “We have not much time for speech, Lynet,” he whispered tenderly.

She saw his lips moving, but her feeble attempt to pay attention to his words failed her as panic of being alone with him began to set in. “What?”

He looked on her with an amused expression. “Dristan…he will come in search of us,” he answered. “I but wished to speak with you privately so we could come to an arrangement.”

“An arrangement?” Her eyes narrowed when she became suspicious of his motives for being here. Does he honestly believe he can just lay claim to me as easily as that?

He does! Merciful heavens, did she appear to him as some simpleton, or merely a naive fool who would willingly come to him after a crook of his finger?

Lynet pulled out of his arms and stood behind a chair, as if this simple act of putting such an inconsequential piece of furniture between them in itself would protect her from his advances. “Surely, you jest, or did you not witness the spectacle outside our gates?” She was doing everything within her power not to let her temper flare out of control.

“Nay, I do not see the matter as something to jest about,” Ian replied, taking several steps towards her. “I would have thought you to be happy to see me after all this time, or am I mistaken?”

“I would have been happier if I had seen you afore you sent that bloody note!”

“I had nothing to offer you at the time ’twas written, Lynet. Surely, you can understand my plight and reasoning for sending such a missive.”

“I waited for you for all those years, and you wrote me but a few lines. A few lines, Ian!” Her fingers balled into fists at her side. Although, in truth, she would have liked to have beat them against his chest to drive the point of her frustration into his thick skin. How could he not know what his absence had done to her poor little heart?

“I told you at my leaving not to wait. Nothing changed over the years, and ’twas not ’til recently that I was told I should write so you could go on with your life.”

“You did not even write of your own accord?” she shouted at him and began shaking with fury.