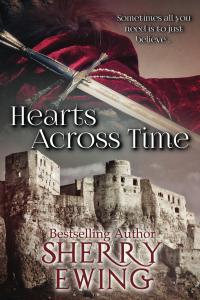 Hearts Across Time ~ The Knights of Berwyck, A Quest Through Time (Books One & Two)

Bestselling author Sherry Ewing presents this special edition box set combining Katherine and Riorden’s complete story from For All of Ever and Only For You in Hearts Across Time: The Knights of Berwyck, A Quest Through Time Novel (Books One & Two).

Sometimes all you need is to just believe…

For All of Ever: Katherine Wakefield has dreamed and written of her knight in shining armor all her life until she and her three closest friends take a vacation to England. Yet, how could they have known they’d find themselves thrown back more than eight hundred years into the past? Riorden de Deveraux travels to Bamburgh answering the summons of King Henry. But nothing prepares him for the beautiful vision of a strangely clad ghost who first appears in his chamber. Centuries are keeping them apart until Time gives them a chance at finding love. Will the past of one consume what their future may hold, or will Time take the decision from them and hurdle Katherine forward to where she truly belongs?

Only For You: Katherine de Deveraux has it all but settling into her duties at Warkworth Castle is not easy & downright dangerous to her well-being. Consumed with memories of his father, Riorden must deal with his sire’s widow. Yet how could he know how far Marguerite will go to have the life she feels they were meant to live? Torn apart, Time becomes their true enemy while Marguerite continues her ploy to keep Riorden at her side. With all hope lost, will Katherine & Riorden find a way to save their marriage?

She needed fresh air…that’s what she needed. Turning into the Great Hall to catch up with her friends, she found herself riveted to the floor. Even if she’d wanted to move, she couldn’t have. Hardly believing what she was seeing, she became mesmerized when the tourists milling around the chamber slowly vanished before her eyes.

Only one man was left standing at the far end of the room, or rather, one knight. He had been reaching for something on a table when Katherine saw his shoulders flinch. His red cape swirled around his legs when he turned to face her. Their eyes locked and Katherine’s breath left her at the intensity reflected in his face. Shock, intermingled with excitement, rushed through her. Her whole body began to tingle. Good God, it’s him! Her mind screamed. He stood there with such a commanding presence about him that she had no recourse but to move in his direction.

Inch by inch, the distance between them lessened as he, too, moved swiftly across the floor. Her arm extended, she reached for him, and yet their meeting was not to be. He quickly vanished, passing right through her. Her body lurched from the contact when the wispy vapor that had been him disintegrated upon their meeting. A soft cry of distress escaped her lips. How could fate be so cruel as to take him from her before they could speak even one word together?

Modern surroundings returned, and Katherine became disorientated when she was rudely bumped by some jerk, who didn’t even mutter an apology. She swiveled around, trying to see if her knight was maybe still lurking in the hall, but there was no trace of him.

She had taken no more than a few short steps when a voice whispered inside her head. Katherine…come back to me, my love.