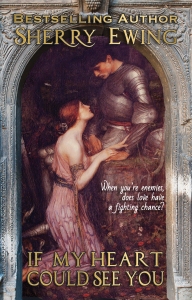 When you’re enemies, does love have a fighting chance?

For Amiria of Berwyck, defeat does not come easily as she watches her home and clan being ripped asunder. When the very enemy who has laid siege to her home demands her fealty, she will do whatever it takes to protect her people including a hastily concocted ruse that quickly begins to unravel. All too soon, she starts to question whether she can forgive herself for betraying those she has sworn to protect.

Dristan of Blackmore, champion knight of King Henry II, has a reputation to uphold as the Devil’s Dragon. After his invading army conquers Berwyck castle, he sets out to manage the newly claimed estate by training its knight in the art of proper defense. At first, everything appears as it should be, or is it? Betrayed by those he believed he could trust, he must first set aside his anger before he can make room in his heart for love.

Together they are tied by an unspoken bond. As they begin to rebuild the land and unite their people, forces beyond their control attempt to tear apart their fragile truce and only time will tell if love will forever bring them together.

Merciful heavens, what was she to do? His words hung in the air between them, and her consciousness frantically screamed to find an answer to give him and quickly! Yet, no rebuttal came to her frozen mind as Amiria stood there in total indecisiveness. She knew she could not allow him to get too close on the off chance he might recognize her, even though her face was clean from the grime and mud usually gracing it these days. ’Twas the words he uttered, haunting her as he had spoken them to her once afore, although she was now in a different guise.

“Somehow, I do not think giving you my name would be in my best interest, my lord,” she said quietly and took but an instant more to gaze at him afore her eyes became downcast. Her mind was racing, thinking of only how to escape the predicament she now found herself in with no horse to hasten her journey.

Dristan gave a soft chuckle at her words. “Mayhap not, but ’twould please me to know it just the same.”

“It matters not to me if you are pleased, so I will keep it unto myself I think,” she retorted sharply.

“I see a task afore me that I might coax it from your lips,” he prompted, taking a step in her direction. For each footstep he advanced, Amiria took one in the opposite direction towards the forest ’til he halted.

“Call it as you see fit, but ’twill still not gain you what you seek.” Amiria watched as he laughed out loud, but she could not find the humor of the situation from her words she had spoken.

“I do so love a challenge,” he argued humorously.

“Do you?” she asked sarcastically. “And what, pray tell, do you achieve if you should know my name, my lord?”

Dristan looked on her with a slight smile set upon his handsome face. “Why I achieve the name of a beautiful woman I would like to know better.”

She contemplated him again, wondering at his ploy. “And how know you I am beautiful with just one glimpse of my face?”

“Anyone with eyes in his head could tell, fair damsel, you are indeed a fine looking woman.”

“They say beauty is not everything, my lord Dristan. Perchance I have a shrewish nature, as I have been told such afore.”

“Do you?” she repeated the same words of but seconds ago.

He interrupted her. “Besides, ’tis not fair you should know who I am, but I am not granted the same.”

“Any and all would be a fool not to know the Devil’s Dragon of Blackmore now claims his lair in Berwyck Castle.”

“Then you have heard of me and my reputation has proceeded me,” he cajoled.

“Aye, my lord, I have indeed knowledge of you.”

“I see you do not fear me, as some do upon first encountering me. Why is that, I wonder, when you in truth do not know my nature?” he questioned honestly.

“I fear no man,” she answered, as she raised her head defiantly with a flip of her head, “or beast for that matter!”

Dristan threw his head back and laughed. It sounded pleasant to her ears. “Well said, damsel. Mayhap in you I have finally met my match! Still you have me at a loss mistress…besides not giving me your name, that is.”

If My Heart Could See You is also now available as an Audiobook. Come listen to how Marian Hussey has made my novel come to life!
Narrated by Marian Hussey