I’m so glad you could join me again for another Medieval Monday! Today I continue with another snippet from The Piper’s Lady.

You can also join us on the Medieval Romance Lovers Facebook page at https://www.facebook.com/groups/1401384450126130/ for a complete list of all the authors who are participating including their links! Find us also on Twitter at #MedMonFall20!

When last we checked in with Garrick of Clan MacLaren, he had just learned that Lady Coira had scooted up a tree in terror of a hideous snake! Read on and enjoy, my lovelies! 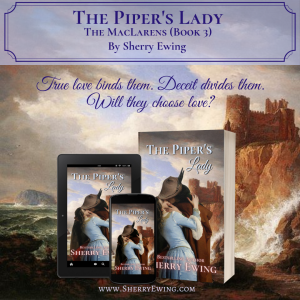 Garrick attempted not to laugh, drew his sword and began poking around the low shrubbery. He at last saw Coira’s monster slithering away, minding its own business. He picked up the snake with the tip of his blade before giving the reptile a toss to ease the lady’s mind.

Coira gave a sigh of relief. “You should have killed the beast so ’twould not harm another venturing in the woods,” she scolded.

Be sure to join me next week for Medieval Monday for another snippet from The Piper’s Lady!

12 thoughts on “Medieval Monday with The Piper’s Lady”