Welcome to my First Kiss Friday Blog. I’m happy to have as my guest Barbara Bettis whom you’ve also seen during Medieval Monday’s. Enjoy this excerpt from her novel For This Knight Only. Take it away Barbara!

GIVEAWAY: Summer has arrived with a vengeance, hasn’t it? To help readers keep cool. I’m having a giveaway. From comments on this post, a winner will be drawn for a copy of FOR THIS KNIGHT ONLY, along with a surprise cool gift.

Thank you for having me on your lovely blog today, Sherry. I’m celebrating the four-month anniversary of the release of my latest medieval. I loved writing Roark and Alyss’s story. Both are determined to have their own way, but each must learn to compromise. 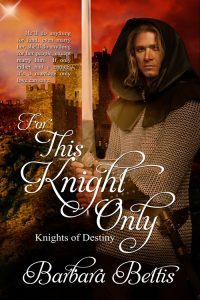 Anger drove her to answer without thought. “No one can force me to marry.”

He stepped back. “Sir Baldwin, tell Lady Alyss of the messenger who just left.”

Baldwin shot her a pained look of apology. “From Windom he came, milady. The new master there commands an interview tomorrow, under order of Prince John. I sent him on his way, but it don’t look good. This new master’ll be here early in the morn, I’m bettin’.”

Sir Roark chuckled. “By God, my lady, we’ll deal well together.” He grabbed her shoulders and pulled her against his broad chest.

Before she could protest, Sir Roark’s mouth was on hers, and she was forced to clutch his sleeves. Only to keep from tumbling over, of course, because her traitorous legs threatened to collapse. Then the tip of his tongue brushed the seam of her lips, and she lost all thought but his taste and the strangely comforting arms holding her up.

The kiss had been a damned mistake. Roark had meant it as a statement of possession. But her softness hit him like a mace. When he inhaled the rich fragrance of spice and roses and woman, his intent changed. He hauled her closer, slanted his mouth, stroked his tongue along the seam of her lips. At her whimper, a flicker of guilt undercut Roark’s stirring of desire. He ought not do this to the lady. He ought to gather his belongings and be on his way.

But the memory of the recent messenger lingered. That one portended nothing good. If Roark gave in to his inconveniently awakening conscience, by tomorrow night Chauvere, its people, and its lady would be the property of the neighboring lord. Of that, Roark was certain. So the way he saw it, either Lady Alyss married him or she’d be forced to accept someone else. And if Windom’s representative was any indication of his master, she’d not like that alternative.

What would it take to persuade her? A sudden pain burst between his legs, and he gasped, eyes blurry. The little hell-cat kneed him. Even though chain mail deflected some of the impact, he used every bit of his willpower to remain standing.

For This Knight Only
By Barbara Bettis 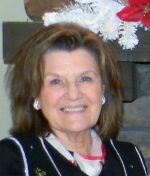 Award-winning author Barbara Bettis has always loved history and English. As a college freshman, she considered becoming an archeologist until she realized there likely would be bugs and snakes involved. And math. Through careers as a newspaper reporter and editor, then a college journalism and English professor, she’s retained her fascination with history. Give her a research book and a pot of tea, and she’s happy for hours. But what really makes her smile is working on a new story. Now retired, she lives in Missouri where she spins tales of heroines to die for—and heroes to live for.