Happy holidays, my lovelies! I would like to extend the very best to you and your families for this holiday season from the Bluestocking Belles. Welcome to our blog hop in celebration of our holiday box set, Follow Your Star Home. My gift to you is a short story of what happened to the ring after Thomas returned it to his father. 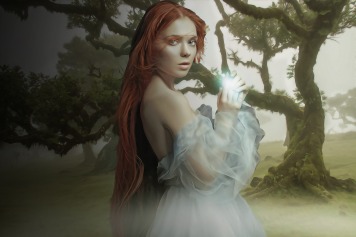 Zoe’s breath hitched. She must be dreaming. How else could she possibly be walking through an ancient hall in a medieval castle? She moved forward, or more like floated, so she knew she must have been sleeping.

She watched the scene play out before her as though she watched it on a flickering movie screen. She smiled when she saw her friend Jade conversing with a knight at the raised dais. The name Thomas skimmed across her mind and Zoe knew her friend had found her soul mate whether Jade knew it yet or not. But how was any of this possible?

A feeling of being watched washed over her and she suddenly turned as though a force beyond her control made her do so. Startled, she came face to face with a handsome stranger. A knight of olden days to make any fair maiden lose her heart in the instant their glances met. Tall with black hair that fell below his broad shoulders, the knight continued to watch her with sparkling blue eyes as though he knew some secret she was not privy to.

“Mademoiselle,” the knight murmured before taking her hand and raising it to his lips. His eyes searched hers until they assessed her clothing… her very modern day clothing.

Zoe suddenly felt out of place. “Sir…” she allowed her unfinished words to linger in the air between them.

“Morgan… at your service,” he replied. He looked around the room before he took her arm and placed it in the crook of his arm.  A jolt of heat raced up her hand at the contact. “You appear lost. Mayhap you are one of the new ladies come here to attend the Lady Amiria?”

Zoe’s eyes widened. “Lady Amiria? As in the lady of Berwyck Castle?”

“Is there any other who could measure up to such a name?” he chuckled. “Let me escort you to her. She will be able to ensure you are properly attired. You must have traveled a long way in order to be here.”

“Sir Morgan, I need you to take me to Kenna. Is she here?” she asked quietly. Kenna would be able to explain everything… after all… the woman was her great-grandmother, several generations removed that is.

“She must still be outside. We had several men who were injured in the lists this day. Come, I can take you to her hut,” Morgan said, as he began ushering Zoe from the hall.

He grabbed at a cloak thrust into his hand by a servant and placed it upon her shoulders. She shivered when he closed the clasp at her neck. “Thank you,” she murmured, suddenly feeling shy in the presence of this very handsome knight.

“You are most welcome, Lady…” he gave her this lopsided grin that completely transformed his rugged face making him appear several years younger.

Zoe laughed realizing she had not given her name. “Zoe. It’s a pleasure to meet you, Sir Morgan,” she answered him as she thrust her hand forward for him to take.

He looked at her offering oddly before taking her hand in his calloused one. Warm heat seared straight to her heart and Zoe watched his eyes widen at their contact. He raised her hand once more towards his lips but instead kissed the inside of her wrist. Her toes curled and she swore such a sensation had never before consumed her of this magnitude.

“The pleasure is mine, dear lady. Perchance once you have concluded your business with our healer, you would allow me to accompany you to the table to break your fast.”

Zoe smiled. “I would love to, kind sir,” she said. I could get used to this kind of treatment.

He opened the door of the hall and Zoe walked outside only to stare in wonder at what she saw: snow falling upon a full-blown medieval castle in all its glory. She should have been watching where she was going but she was so preoccupied with the view and her companion that she completely missed the steps in front of her. She began to tumble forward while a scream tore from her lips.

Arms of steel wrapped around her to break her fall and her arms automatically went around his neck as though holding onto Morgan was the only thing that kept reality and her dream from colliding. His lips parted and she watched when his head began to bend forward to steal a kiss. She had never wanted anything more in her entire life.

Their lips were but a breath away. Quickly they broke apart but Zoe still clung to Morgan’s arm, afraid that if she were to let go she would lose him to Time.

“Zoe… you must needs go home!” Kenna’s voice rang out in the inner bailey.

Morgan pulled her close, even while Zoe knew she was beginning to return to her own place in time. “Stay with me…” he murmured against her ear. “I just found you and cannot let you leave me so easily.”

Zoe reached up to cup his cheek, rubbing her thumb against his five o’clock shadow. “I would stay if I could,” she whispered. “Remember me…”

“Always.” He took her hand and once more placed a gentle kiss into her palm. “Come back to me, Zoe,” he said before leaning forward to kiss her.

It was everything she would ever want in a first kiss and as she tightened her arms around this handsome knight she gave herself into the moment… that was until her eyes snapped open and she found herself staring up at the ceiling in her apartment. A sob tore from her throat while she flung off the covers to sit at the edge of her bed.

“Why!” she yelled out in frustration only to see a vague vision of Kenna standing before her. “Why? Why would you show me him and then not let me stay?”

“Dearest granddaughter… I showed you nothing other than what you desire but you are not finished with your work in this time and until you are, you must stay here.”

“But what about Morgan?” she asked while tears ran down her face.

“You will know when it is the right time and place for you to find each other again. He will be waiting for you to come home…”

Zoe reached out for the woman who had been a constant in her life yet lived century’s ago. Before her grandmother faded from view, a soft golden glow began shimmering in her hand. She blew a kiss and a twinkling trail like starlight went towards Zoe’s bedside table. Zoe stared in wonder when a golden ring took shape. She reached over to clasp the ring to her chest and smiled knowing she would one day see Morgan again.

And in another place in time, Morgan awoke to still feel the lips of Zoe upon his own. He reached up to feel them still tingling from the contact. He began to dress to seek out Berwyck’s healer knowing Kenna would have the answers he stood in need of. He needed to find Zoe no matter the cost. Even Time itself would not keep them apart!

Did you enjoy Zoe & Morgan’s dream together? I sure have an idea for a full story for them after I take care of a few other characters who are vying for my attention. Be sure to leave me a comment here and to follow the Viking star ring to each of the Belles’ websites to be in the running for our giveaway. You can learn more about it here at the Belles’ website along with the sale we’re running until December 15th: https://bluestockingbelles.net/follow-your-star-blog-hop/. The more you comment on each site, the better your chances to win!

Divided sweethearts seek love and forgiveness in this collection of seasonal novellas.

In eight stories covering more than a thousand years, our heroes and heroines put this legend to the test. Watch the star work its magic as prodigals return home in the season of goodwill, uncertain of their welcome.

23 thoughts on “Happy Holidays from the Bluestocking Belles & a giveaway!”