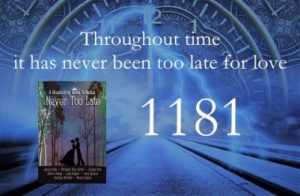 You’ve arrived in the year of my novella, The Piper’s Lady, which appears in the Bluestocking Belles’ box set Never too Late. I hope you enjoyed your visit to 1814 when you traveled to Vauxhall & Drury Lane via Susana Ellis’s blog last week here. Did you leave her a comment for our giveaway? Be sure to do so along with leaving one for me here on my blog! But we have lots of time traveling to do so read on…

You’ve now found yourself in medieval, England… Sorry about the war, harsh living condition, and bad drinking water but there is a lot more happening at the time of my story… 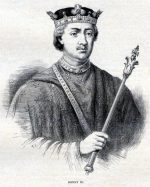 Henry II (1133-1189) is king of England in 1181, and he’s part of the good news. He’s building up our court systems and seems to be very big on the rule of law, something that may catch on. He and Eleanor of Aquitaine (1122-1204) had eight children but of course they haven’t all lived to adulthood. One who did is known as Richard the Lionheart (1157-1199). Unfortunately, several of them have led revolts to secure the succession and are eager to acquire power and lands. 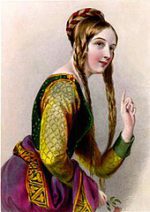 Their mother, Eleanor is one of the wealthiest and most powerful women in Western Europe at this time. Henry II might be called a ruthless ruler in his determination to restore the lands and privileges of his grandfather Henry I, but he has done a good job of strengthening England’s borders with Wales and Scotland. He’s also used the country’s wealth to fund a long-running war with his rivals in France.

The tale of Tristan and Iseult is one of the favorite tales at this time. The story is a tragic one about the adulterous love between the Cornish knight Tristan and an Irish princess Iseult (Isolde). However terrible the ending to their story, we love it and believe it will have a substantial impact on Western art and the idea of romantic love.

The Lives of Lovers ~ What they ate…

My characters in The Piper’s Lady are members of the nobility and what they eat is far different from the food of commoners or even kings. They eat plenty of fresh game seasoned with exotic spices and display refined table manners, and have wine on a daily basis. Their servants and the lower classes drink ale or mead. Meals are usually a communal affair and my Knights of Berwyck gather in the Great Hall for their meals. 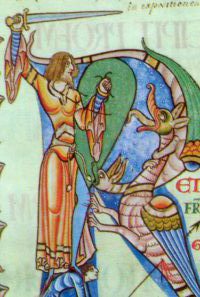 We care about fashion in 1181, just like your own time. Men wear an inner tunic or shirt with long tight sleeves and drawers or braies. Tailored cloth leggings called chausses or hose (separate garments for each leg) are often worn with an outer tunic that reached to their knees or ankles. A recent innovation the surcoat has been well received and is worn by both men and women.  The knights in my story, wear chainmail to go to war or practice in the lists. Full body armor, which you might think of when envisioning a knight in shining armor, won’t be introduced until later. 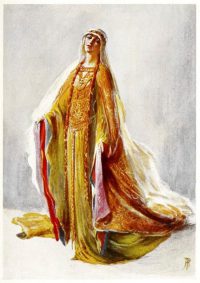 Women wore an under tunic called a chemise (usually made of linen), over which is worn one or more long tunics (or gowns/kirtles). A close fit to the body, full skirts and long flaring sleeves are characteristic of my characters in The Piper’s Lady. They also wear a veil over their hair that was often parted in the center and hung down in long braids.

My characters from The Piper’s Lady live in a castle called Berwyck located at the England/Scotland border. Note:  although there is in fact a castle located at Berwick-Upon-Tweed, little remains of it in your century as the foundation was torn down to build other structures in the area during intervening centuries. As an author, I decided to change the spelling of the castle name and, as my time traveling ladies will attest, the castle will still be thriving in the future.

Marriage in 1181 usually happens to gain power, wealth and lands, at least for the nobility. Commoners have to seek permission from their master in order to marry or they will be punished. Lady Coira Easton and Garrick of Clan MacLaren from The Piper’s Lady also have had the problem that Garrick is not a knight. Since he holds no title, Coira’s cousin, Lord Dristan of Berwyck, may not give so readily his permission for the match. But love always finds a way…

Comment on all eight blogs in the tour and be entered to win a $25 gift voucher from Amazon and a print copy of Never Too Late!

You can get to all eight blogs via the time machine page on our Bluestocking Belle’s website once all tour stops are published. Next week you’ll slip through time and find yourself in 1324 via Nicole Zoltack’s blog here!

Fare thee well, time traveler! Try not to land in the midst of the Black Plague, the Great Fire of London or the sack of Rome!

About The Piper’s Lady:

Lady Coira Easton spent her youth traveling with her grandfather. Now well past the age men prefer when they choose a wife, she has resigned herself to remain a maiden. But everything changes once she arrives at Berwyck Castle. She cannot resist a dashing knight who runs to her rescue, but would he give her a second look?

39 thoughts on “Throughout time, it has never been too late for love…”