Any time an author launch’s a new book into the world is always a wonderful day! I will admit The Piper’s Lady, releasing tomorrow within the Bluestocking Belles’ 2017 anthology Never Too Late, came as a huge surprise. It was as though Garrick of Clan MacLaren just jumped into my head and began demanding my attention to tell his story. I couldn’t resist letting the man have his way. So come back with me in time to my Knights of Berwyck series where Garrick first appeared as a secondary character in my debut novel, If My Heart Could See You. It’s First Kiss Friday, after all, and everyone loves to read a first kiss scene. Happy reading and enjoy, gentle readers…

“’Tis a pleasure tae be of service tae ye once more, my lady,” Garrick said, again not correcting her assumption he had been knighted. He should do so whilst they had the rare opportunity of being alone. Still, he could not forget the earlier scene he had witnessed just a short time ago and mayhap ’twas his reasoning to let her think on him favorably for a short while longer. “Let us see what we can do about getting ye out of the tree now, shall we?”

Coira began to scoot off the branch whilst attempting to keep her skirts in place. Garrick lifted his arms to catch her, but suddenly, Coira lost her grip on the tree. Another startled scream was torn from her lips as she began to fall.

Garrick once more captured the woman in his arms as they fell to the ground in a heap. In a repeat performance, he rolled to bear the impact ’til she was captured beneath him. Hazel eyes stared at him in wonder, and his heart lurched in his chest.

“Sir Garrick…” His named passed her lips in a breathy whisper.

“Lady Coira…” he answered, and afore common sense returned to him, he leaned down and placed his lips upon her own.

By God’s Bones, he must be mad, he thought even as her arms pressed their way over his shoulders and wrapped themselves around his neck. His mouth moved over hers gently for he did not wish to scare her. ’Twas an exploration… a first-time meeting of two souls as their breaths exchanged with one another. He was lost ’til a low throaty moan escaped her and brought him back to the reality of what he was doing. 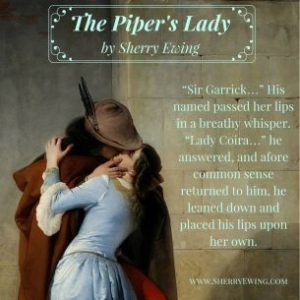 He broke off their kiss and jumped up as though he had been burned, which was not far from the truth. Bloody hell! If Coira were in truth Morgan’s lady, the knight would skewer him alive and see his head placed on a pike outside Berwyck’s gates for taking such a liberty. He would not think of what Lord Dristan would do to his remains since the lady was also under his watchful eye.

He began cursing and pacing back and forth ’til he realized he had left the lady of his musing lying on the hard ground. She had propped herself up on her elbows and was watching him intently. He came to her and held out his hand to help her rise. Her fingers slipped into his palm, and he once more forgot about everything else but the lady he pulled up to stand.

Her knees gave out, and she once more fell into his arms as they stumbled up against the very oak that began the downfall of his life as he knew it. Garrick reached out to steady them whilst her back was up against the solid trunk. He clearly had no sense left in his head whilst he rested his arm above her head and stared down at the beautiful woman who was beginning to claim his heart.

“Coira…” he murmured. “’Tis a beautiful Gaelic name, but I am surprised ye are called such for an English woman.”

Eight authors and eight different takes on four dramatic elements selected by our readers—an older heroine, a wise man, a Bible,
and a compromising situation that isn’t.

Set in a variety of locations around the world over eight centuries, welcome to the romance of the Bluestocking Belles’ 2017 Holiday and More Anthology.

1354 ~ Her Wounded Heart by Nicole Zoltack

A solitary widow, a landless knight, and a crumbling castle.

1645 ~ A Year Without Christmas by Jessica Cale

An earl and his housekeeper face their feelings for one another in the midst of the English Civil War.

1795 ~ The Night of the Feast by Elizabeth Ellen Carter

One night to risk it all in the midst of the French Revolution.

1814 ~ A Malicious Rumor by Susana Ellis

A harmonious duo is better than two lonely solos for a violinist and a lady gardener.

Forged in volcanic fire, their love will create them anew.

1916 ~ Roses in Picardy by Caroline Warfield

In the darkness of war, hope flickers. In the gardens of Picardy, love catches fire.

Be sure to join the Bluestocking Belles’ Facebook launch event tomorrow. We’d love to have you help us celebrate our latest box set! Just click here.