It’s week nine for our Medieval Monday blog hop and today’s guest is author Nicole Locke. Nicole is sharing a snippet from her novel Her Christmas Knight so be sure to read on and leave her a comment to be in the running for our giveaway. Enjoy! 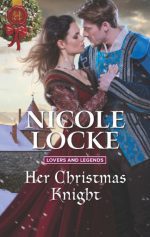 The seal slipped in her suddenly damp hands. She knew that nose. She had broken that nose. Reluctantly, against her will, she raised her eyes to his again. He was still studying her.

She felt permanently latched to him. She could not move even to let air into her lungs. Oh, she didn’t want to, but she knew those eyes. And they knew her. There was no confusion in their blue depths, there was only…waiting.

But he couldn’t be the man she knew. She hadn’t heard from him or seen him for more than six years. She’d thought him dead. She wanted him dead.

‘Hugh?’ The name escaped before she knew she still had a voice, and the corner of his lips lifted.

A knight to protect her—this Yuletide

By order of the English king, Alice of Swaffham searches London nobility for the traitor dealing information to the Scots. Little does she know that the mysterious spy she seeks is the man she once loved and thought she’d lost forever…

If Hugh of Shoebury felt unworthy of Alice before, as the Half-Thistle spy he can never claim her heart. Now he must fight to keep not only his dark secrets—and Alice—safe from a vengeful king…but also his burning longing for her at bay!

Next Monday, Nicole is at Elisabeth Hobbes’s blog here.
You can also find my snippet on For All of Ever on Nicole’s blog here.

15 thoughts on “Medieval Monday with Nicole Locke & a Giveaway!”