Be My Guest, Contemporary, Romance

Today on First Kiss Friday, I have guest Pamela Gibson who is a member of my local chapter of Romance Writers of America. We hope you enjoy this excerpt and first kiss scene from A Kiss of Cabernet. Happy reading!

A Kiss of Cabernet By Pamela Gibson

Napa Valley vineyard manager Paige Reynoso is furious. After a six-year absence, her boss—big-city entrepreneur Jake Madison—has returned, only to announce he’s selling the vineyard. Paige has always dreamed of buying Garnet Hill, which sits on land where her ancestors first settled, but without the cash, she’s out of luck. And then there’s an even bigger problem…she has a serious thing for the surprisingly tempting man who’s just destroyed her dream.

Jake’s in a tight spot. With his other business ventures struggling, he needs cash— fast. The last thing he needs is the too-lovely Paige convincing him the grapes are an effective long-term investment. Or needing Paige herself, whose spirit and heart bring his to life. But as their attraction grows, Jake knows he’s not in a position to offer her anything beyond this moment. Because Jake has a big secret…and it has nothing to
do with sour grapes.

Rain came down in sheets now, and Jake scanned the fields, looking for Paige. He thought he spotted her in the distance, so he ambled in that direction.

He called out to her, but his voice was muffled by the rain. He continued toward the downward slope until he saw her with a full bin at the end of a row. She had taken the farm’s tractor to haul the smaller bin of blending grapes to the barn and was climbing into the seat. The others had already been hauled off to the waiting wineries.

“I’m through here,” she shouted. “Climb on the back of the trailer. I’ll give you a ride.”

Jake found a spot where he could hang onto the full bin for support.

The trip back seemed endless, and both were drenched by the time they stowed the bin. Everyone else had gone home.

“We’ll take these to the winery tomorrow and see if they’re even usable,” said Paige, pulling the doors shut behind her. She was breathless and beaming. Her smile generated as much warmth as a solar plant.

“I’m always happy when harvest ends,” she said. “Aren’t you happy, too?”

“To tell the truth, I’m going to collapse any second.”

They stood looking at each other, and Jake’s fatigue disappeared. Raindrops kissed her face like dew on an open rose. Her wet clothes, molded to her skin, displayed every luscious contour and curve. She was a nymph, risen from the sea, the magnetism of her smile drawing him forward, warming him as surely as a tropical sun. He wasn’t standing in a muddy field in a Napa Valley vineyard. He was barefoot on a deserted Caribbean beach, his toes sinking in sand, watching his woman approach.

The pad of his thumb caught a drop meandering down her jaw to her neck, where his lips wanted to be. Forgetting all of his good intentions, he pulled her into his arms, her breasts tight against his chest.

She trembled against him, straining into his body. Her hair smelled like rainwater and damp earth, her body cool and supple. As if it were the most natural thing in the world, he covered her mouth with his own, letting the moment take him, forgetting about the rain that pounded around them or the breeze that had turned chilly. He wanted her. Here, now, between growing vines and fallen leaves, in the rain and the mud. Anywhere. And she wanted him, too.

“Let’s get out of this,” he said, pulling her toward the house.

She didn’t move, her anxious eyes searching his face.

“This is madness, Jake.”

She hesitated and took a deep breath, as if considering her response.

“Come on before we drown.” He tugged at her arm.

Nodding, she took his hand and they ran for the house.

Purchase A Kiss of Cabernet: 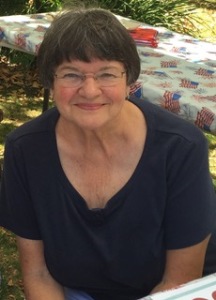 Pamela Gibson writes on a 32-foot Nordic Tug, a trawler called Sea Bear. Married to a man who has salt water in his veins, they spend half their time cruising and half their time on land. The Sonoma and Napa Valleys are her favorite settings, full of stories waiting to be told. But there will be others, inspired by the cruising lifestyle that took her from Mobile, AL to the East Coast, to the Great Lakes, and down the rivers of middle America back to the Gulf.
Pamela is the mother of two, grandmother to a yellow lab, four rescue cats, a lizard and a fish. She has a bachelor’s degree in history, a master’s in public administration, and was lucky enough to win or final in twelve contests while honing her craft.
She’s addicted to chocolate, white sand beaches, and all the trappings of Christmas. She loves to hear from readers. Connect with her and sign up for her newsletter or blog at http://www.pamelagibsonwrites.com or follow her at: