Welcome to First Kiss Friday. Today’s guest is my friend and fellow Bluestocking Belle, Rue Allyn. Rue has an excerpt from One Night’s Desire. You may wish to have your fan on hand. #just saying Happy Reading, my lovelies! 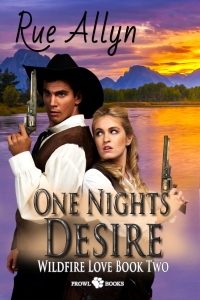 Kat’s whispered plea was so quiet that Ev almost didn’t hear it. He sat up rapidly checking the campsite for intruders. Then she begged again louder.

“No, please. I promise. I’ll do anything you want.”

He swiveled to look at her and was held agog by the sight.

She sat in her shirtsleeves. Sweat gleamed her face. She held the buffalo robe at arm’s length, bunched material clutched in each hand.

“This is wrong. You can’t be so cruel.” Her voice continued to rise. “Please don’t ask me to sell myself. I’m not a whore.”

Releasing her hold on the robe, she let it fall to the ground then began to wrestle the covering as if fighting for her life.

At the thud of her fists against the robe covered earth, Ev leapt from his bedroll. Coming up on Kat from behind, he knelt and secured her in a bear hug. He didn’t want to hurt her, but feared that she would harm herself. She was scorching hot to the touch. Fever-born delirium possessed her, and she shifted from fighting the buffalo robe to fighting Ev, twisting and turning to get better aim at him.

This was not good. He had to snap her out of it.

Her hands stilled against his chest, and she blinked at him. “Really? Oh Herbert, I knew you wouldn’t want me to do that. You really do love me.”

Who in Hades is Herbert?

That was Ev’s last thought before Kat plastered her lips to his, filling his head with sweet surprise and his body with sweeter agonies.

Momentum brought him to the ground, and her legs tangled with his.

Her mouth was soft. Her breasts pressed warm against his chest. He pulled her closer and gave himself to madness.

She twined her arms around his neck then ran her tongue along the seam of his lips.

Her fingers stroked his shoulders, his arms, his chest. Cool air and hot woman struck his skin. She’d unbuttoned his shirt.

His blood boiled with longing. His body hardened. He wanted, needed, to be inside her, love her, make her his.

Her hips moved, undulating against his erection. He had to have her.

“Please, make love with me, Herbert.”

Forever afterward, Ev would associate ice cold water with the name Herbert. Nothing could have doused his ardor more effectively.

Bracing her hands against his chest, she levered herself up. Delirium still burned in her eyes “We’ve already done this. How can you refuse me?”

As gently as he could, Ev took her by the waist and lifted her from his body. “Simple. I’m saying no.”

“You think I’m good enough to whore for you, but I’m not fit to be your lover. After all your demands, you’d deny me. I won’t let you.” She clawed and scratched at Ev, twisting against him and breaking his grip.

He scrabbled to restrain her, but her flailing arms went everywhere. He managed to secure one wrist. Before he could move to grasp the other, she swung and connected with his eye.

As if struck, she went rigid then collapsed with a moan into a shivering, still sleeping heap against Ev’s chest.

He hurried to wrap her in the buffalo robe, built up both fires, and buttoned his shirt then donned his boots and coat. He checked on Kat who, despite the heat of the fires, her own fever and the robe, continued to shiver. The chill air had him doing a bit of shivering himself. He took a minute to consider his alternatives and noticed that the sky had lightened. Dawn was breaking.

A WOMAN ON THE RUN ~ Rustlers, claim jumpers and fire, nothing will stop Kiera Alden from reuniting her family.  But an accusation of murder threatens her dreams and sets Marshall Evrett Quinn on her trail.  She may be able to escape prison bars and eventually prove her innocence, but she can’t escape Quinn’s love.

A LAWMAN IN HOT PURSUIT ~ Marshall Evrett Quinn is relentless in pursuit of law-breakers, and pretty Kiera Alden is no exception.  Clever and courageous, she evades him until chance encounter turns the tables.  Finally he has this elusive desperado under arrest, but success is bittersweet when she captures his heart.

Get a free copy in exchange for an honest review (only 20 spots available) link https://booksprout.co/arc/36735/one-night-s-desire

Award winning author, Rue Allyn, learned story telling at her grandfather’s knee. (Well it was really more like on his knee—I was two.) She’s been weaving her own tales ever since. She has worked as an instructor, mother, sailor, clerk, sales associate, and painter, along with a variety of other types of employment. She has lived and traveled in places all over the globe from Keflavik Iceland (I did not care much for the long nights of winter.) and Fairbanks Alaska to Panama City and the streets of London England to a large number of places in between. Now that her two sons have left the nest, Rue and her husband of more than four decades (Try living with the same person for more than forty years—that’s a true adventure.) have retired and moved south.

When not writing, enjoying the nearby beach or working jigsaw puzzles, Rue travels the world and surfs the internet in search of background material and inspiration for her next heart melting romance. She loves to hear from readers, and you may contact her at  contact@RueAllyn.com. She can’t wait to hear from you.