Hello, my lovelies, and welcome to another First Kiss Friday. Shhhh… I’m going to cheat a little here since I just shared the actual first kiss scene with Roselyn & Edmond a few weeks ago. So here’s the second kiss scene from One Moment In Time that releases on Sunday, October 28, 2018. I’m so excited to finally get this novel out into the world. In this scene, Roselyn & Edmond have been to the theater. Happy reading and enjoy!

Edmond had been true to his word. The evening was magnificent and one Roselyn would remember for years to come. The play was spectacular, mesmerizing her from the moment the actors took the stage. At the intermission, she and Edmond mingled with other couples and drank champagne. The bubbles tickled her nose and Edmond laughed at her expression. The only down side to the evening was when Brandon told them Calliope was feeling ill and he would hire a hack to see her home. By the time the play ended, Roselyn was beginning to tire and she asked Edmond if he would be terribly disappointed if they skipped the ball they planned to attend. He was sympathetic to her plight and redirected his driver to take them to the Winslow townhouse.

The brisk cool air of the night came through the carriage and Roselyn shivered as it touched her skin. Noticing her discomfort, Edmond closed the heavy curtains in the conveyance. Reaching across to the opposite seat, he lifted the lid and brought out a blanket to warm her, placing it over her legs. She scooted closer to him to share what warmth could be found. He welcomed her advance, given the grin he gave her, and he reached for her cold hands. 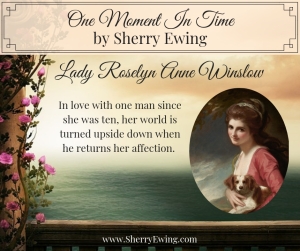 He brought them to his lips, blowing warm air onto them. Roselyn held her breath and felt her heartbeat quicken as she watched him perform this small act of kindness. Breathe; she thought to herself… remember to breathe, Rose. Until this very moment, she had not thought of the consequences of being alone with Edmond while his brother attended to Lady Calliope.

When her hands began to warm, he finally let go and Roselyn immediately felt the loss. Of a sudden, she felt a boldness she had never known before. Her hands made their way to the sides of his face as if to memorize every feature. Slowly she stroked each attribute that made him the most incredibly handsome man she had ever met. But it was not enough. She longed to feel his hair beneath her fingertips. No longer could she resist the urge and, with a small smile, she boldly reached up and touched the curling edges. She watched as he closed his eyes and tried to control his breathing much as she was attempting to do.

Edmond suddenly opened his eyes and gently reached for her hands. “Roselyn, you know not what you do to me,” he huskily stated. “If you continue, I may not be able to keep my promise to you and you shall find yourself thoroughly kissed, my lady.”

Roselyn blushed at the thought, thankful that the dim interior light hid how flustered she was. She took a deep breath before reaching to touch the nape of his neck. “Then I hope you shall not think too unkindly of me if I boldly say that would certainly be one way we shall remain warm,” she whispered softly.

A groan escaped him while she continued to watch him intently. Clearly the man was at war with himself if his clenched fist was an indication. She ran her tongue across her lips to moisten them and apparently the gesture was Edmond’s undoing, for he bent his head to place his lips upon her own.

A spark lit in the pit of Roselyn’s stomach at the first touch, and turned into a full-blown flame when he began giving small nips to her lower lip before tentatively touching his tongue to her mouth as well. He began trailing slow kisses up and down her neck, tracing her ear with his tongue. She could feel his warm breath as he continued to play with her ear and then make his way back to her mouth. A small gasp escaped her but could not be repeated as his tongue entered her mouth and did a dance with her own. Sheer pleasure coursed through Roselyn’s body, but still it strained for something more—what, she had no idea.

As Edmond deepened his kiss, she wished this night would never end. Kiss after kiss followed and at some point Edmond pulled her into his lap. She knew such a position was unseemly but she did not care. She was running her hands over his chest and anywhere else she could touch. Never before had she acted so brazenly but she found she could not stop touching this man whom she had loved for years. Yes, love him she did and she only hoped he felt the same, or she would come to regret her actions this night.

The slight lurching as the carriage began to slow brought the occupants of the carriage down to reality. Roselyn scurried off Edmond’s lap and hurried to rearrange her hair and skirts before the door would burst open.

One Moment In Time: A Family of Worth, Book Two

One moment in time may be enough, if it lasts forever…

When the man Lady Roselyn Anne Winslow has loved since she was a young girl begins to court her, Roselyn thinks all her dreams have come true… until the dream turns into a nightmare.

Lady Roselyn is everything Edmond Worthington, 9th Duke of Hartford, could ask for in a wife and he is delighted to find she returns his love… until he loses her, not once but twice.

From England’s ballrooms, to Berwyck Castle and a tropical island that is anything but paradise, Edmond and Roselyn face ruthless enemies who will do anything to tear them apart. Can they recover their one moment in time?

Be sure to join me and my guest this Sunday, October 28th from 2:00-9:00 EST for my Facebook party here. And a party wouldn’t be a party without some great prized. There’s still time to enter my rafflecopter here.

10 thoughts on “First Kiss Friday with yours truly, Sherry Ewing”