Welcome to another First Kiss Friday, my lovelies. Today’s guest is my friend Lea Kirk who is offering one person who leaves her a comment an eBook of Prophecy. Take it away, Lea!

Hi Sherry! Thank you for having me on First Kiss Friday. I’m thrilled to be here to discuss…well…first kisses. The first first-kiss I ever wrote was between Alex, a young nurse from Earth, and Gryf, a blue-skinned alien captain from the planet Matir. The two are destined to fulfill an ancient prophecy of his people, but everyone deserves a chance to get to know each other before jumping in to save the galaxy, right? Alex and Gryf have a slow burn relationship, but something changes the day after he pulls her back from a near death experience. Gryf is pleasantly surprised to discover Alex is ready to take the next step in their relationship, which is an important event when you’re from a planet where the women call the shots. 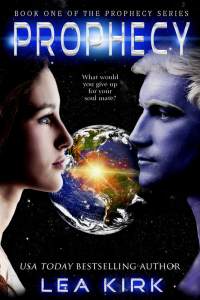 Gryf turned to Alexandra. What a difference from yesterday. Instead of the waxy pallor of death, her skin seemed to glow in the defused light coming through the cave opening.

Her fingers fluttered around her neck as though attempting to discern how to unfasten the Matiran uniform. The high neck and long sleeves were the style worn by engineering maintenance crewmembers. Which of his crew no longer had use for that uniform? Whose parents would grieve for their lost daughter?

Gryf pushed the somber thought to the back of his mind. “Allow me to show you, compa.”

She nodded, her tongue darting out to wet her lips. Then she lifted her chin, exposing the overlapping material at the juncture of her neck and shoulder. Applying gentle pressure, he ran his fingers along the smooth line of the uniform’s seal, and it parted in response until she could peel it back from her shoulder.

The soft swell of her left breast was exposed, smooth and unblemished. Gryf’s heart stuttered and he clamped his teeth together. With supreme effort, he lifted his gaze to study her forehead as if it were a rare treasure from which he could not look away. It was a good thing too because she raised her head almost immediately. Lucky for him he still had his mouth curved in a smile. She could not be aware how difficult this was for him.

Now he did look down. Her fingertips moved over the pale, delicate skin of her breast. The brutal slices of Kotas’s initials were indeed gone, as they had both hoped. Awe filled Alexandra’s eyes. However small, this was her victory, and for her sake he would banish all thoughts of Kotas and Haesi to the darkest recesses of his mind. It was enough to know that the atrocities committed against her had not included rape, a grievous sin that carried the sentence of death for the perpetrator—as did the use of ithemba. A sentence Gryf was more than prepared to carry out when the time came.

He met her gaze again. She grinned and this time his heart turned over in his chest. “Not very long ago I feared I would never see your smile again, Alexandra.”

A faint tinge of pink highlighted her cheeks. “Thank you for saving my life.”

She averted her gaze and her fingers resealed the uniform. When she looked up again, there was uncertainty in her eyes, and something else. Longing? In that moment, it seemed their breathing synchronized. Alexandra pressed her palms against his chest and nothing in the universe mattered, or even existed, except the two of them. She raised her perfect, pink mouth toward him, and he met her half way. The softness of her lips against his sent his thoughts spinning. There was nowhere else he belonged than here, with Alexandra.

Her lips parted and he deepened the kiss, exploring her mouth and caressing her tongue with his own. Wrapping his arms around her, he drew her close. Sweet, so sweet.

All too soon, the kiss ended by unspoken mutual consent. Alexandra smiled at him, her mouth a little pinker and fuller than before. “I think I’d like to keep doing that in the future.”

The corners of his mouth pulled upward. “Nothing would please me more.”

A nightmare of galactic proportions…
One normal day turns into horror when Earth is attacked. Now ER nurse Alexandra Bock is imprisoned aboard an alien slave ship with no way out. She deems all aliens untrustworthy, including the handsome blue-skinned Matiran captain who shares her cell.

A betrayal from within…
One night of treachery leaves Senior Captain Gryf Helyg a prisoner of his enemies. Because of him, Earth’s inhabitants face extinction and his home world is threatened. But his plans for escape are complicated by his inexplicable draw to the Earth woman imprisoned with him.
​
A chance to save both their peoples…
One ancient prophecy holds the key to free Alexandra and Gryf’s war-ravaged worlds. Can two wounded souls who have lost everything learn to trust and forgive in order to fulfill the prophecy, and find a love that will last for eternity? 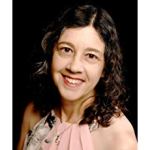 USA Today Bestselling Author Lea Kirk loves to transport her readers to other worlds with her science fiction romance Prophecy series (Prophecy, All of Me, Salvation, and Collision). She’s made one foray into paranormal with her Kindle World vampire novella, Made for Her.

When she not busy writing, she’s hanging out with her wonderful hubby of twenty-eight years, their five kids (aka, the nerd herd), and a spoiled Dobie mix pup.

NEWSLETTER (free download of my Prophecy series short story, All of Me)

6 thoughts on “First Kiss Friday with Lea Kirk & a giveaway!”