Welcome to another First Kiss Friday! Any day I can have one of my fellow Bluestocking Belles as my guest is a good day. Today’s author is my friend, Amy Quinton. You best get out your fans for this excerpt, my lovelies. It’s hot, hot, hot! Happy reading and enjoy. Take it away, Amy!

What the Marquess Sees is an ‘enemies to lovers’ story. The heroine is the villain in my first novel, What the Duke Wants. In this scene, our hero and heroine are on the run from dangerous men, traveling in disguise as a married couple of middling class. They still dislike each other, but their attraction is undeniable. Read on: 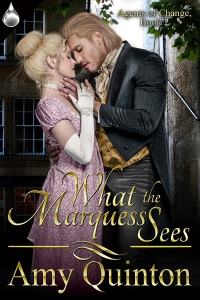 As soon as they reached the door to their room, Beatryce whirled on him. She looked angry, but only for an instant. Then, her look turned sultry and heavy-lidded; seduction emanating out of every pore. He was a little worried by that second look; it spelled trouble in absolute terms. She stepped closer.

He took it back. He was a lot worried, actually.

With another step, she moved into his personal space and looked up, her heated eyes capturing his undivided attention. And in that moment, he had no further thought but for her. In the here and now. No history, no future. He and she and no one else. His senses flew south for the summer, an evacuation that had started with her pretend seduction downstairs, leaving only a glimmer of awareness of their mutual dislike.

Her voice was low, an alto, and slow, sultry. “You are rude and always act as if you hate me…” She placed her hand against his aching, turgid cock and pressed in. Firm and tight. Just like he liked. “…but this says differently.”

He hissed in a breath, and somehow managed to strangle the moan that threatened to give voice to the full depth of his desire.

He covered her hand with his, forcing her to press harder against him. He grunted and couldn’t stop the shift of his hips as they surged forward, deeper into her cupped hand. She squeezed him in response. God, she squeezed him hard. And he closed his eyes as she began to rub her hand up and down his swollen length. Oh, it felt good. Mind-numbingly-forget-your-name-fuck-me-now good.

“And if you’re not careful…” She gripped him even tighter and pressed that much harder “…you’ll blow our damn cover, Dansbury.” She all but hissed those last few words, snapping him back to reality.

She tried to pull away, but he held her in place. He searched deep, ignoring her warning. What did she expect? He’d hated her for too long to be able to easily act as if he adored her. But she had his attention now. Or at least his cock’s devotion at any rate.

Right. Time to take control of the situation. He gripped the back of her neck and pulled her closer, cutting off her attempt to escape.

He leaned in close to her ear and whispered, “You are a beautiful, sensual woman…” He nuzzled her neck, then pulled back and glided his cheek against hers, caressing her with his opened lips, employing the barest touch, a whisper of feeling. “…and I would have to be dead not to notice.”

He reached her lips and hesitated. He breathed in, a slow and steady breath, absorbing her scent—all woman and earthy. He touched his forehead to hers and took a moment to pull together the threads of his crumbling senses. He felt her trembling and it nearly undid him.

He opened his eyes and warned her with a hard look before he grabbed her with both hands and kissed her. Hard and fast and rough and inflexible. And on fire like he’d never been before. A one hundred and eighty degree contradiction to his soft caresses.

But this time he held on to his senses. Just. And in a flash, he pulled back the tiniest bit; though his lips remained close to hers, hovering and reluctant to leave.

“But you’re still a bitch.” Hard words spoken in a whisper with lust underlining the point. A contradiction all around.

He bent to kiss her again, but stopped short when she slapped him. Hard. His head jerked, and the sound shouted its anger as it echoed loudly in the vacant hall.

His cheek was on fire and stinging like nettles. He blinked in astonishment, surprised she had cuffed him so solidly. But she just smiled, wrapped her arms around his neck, and pulled him in for her own fiery kiss. Another fast and furious and passionate kiss, but one that this time, she had initiated. He could not suppress his moan of delight at her boldness. He discovered he liked bold. He liked bold quite a lot.

He was lost to her passion and he no longer cared. He forgot he hated her. He forgot his mission. But he didn’t forget it was her. And all too soon it was over.

Beatryce pulled away this time. It was her kiss to end. She watched her hands as she drew them down his chest. She brushed away the wrinkles in his shirt. A domestic act. And he just watched her in return, slightly stunned. When she reached his waist, his abs clenched at her touch. This time, he held himself in check.

She tilted her head and looked him in the eye. She smiled, a knowing, confident smile, and said, “Yes. I am. And don’t you forget it.”

Then, she turned on her heel and slammed the door in his face.

England 1814: He is a marquess with a woman to protect and an assassin to thwart. She is…not nice.

The Marquess of Dansbury is a strong, charismatic man living a charmed life as an agent for the crown. His past isn’t without tragedy, but he is too amiable to allow misfortune to mar his positive outlook on life. Until now…when he finds himself tasked with protecting the one woman in the world he actively disdains, Lady Beatryce Beckett.

Lady Beatryce Beckett is mean. She ruins other women on purpose. She lies. She cheats. She even steals. And she takes particular pleasure in provoking a certain marquess. In short, she’ll do anything to get what she wants: freedom from her abusive father. But she is strong (she’s had to be), worthy (who’d have thought it), and in love… Wait, what?

It will take a special man to see the true woman beneath the surface…and a strong woman to allow him that glimpse. Is the Marquess of Dansbury up to the task?

Amy Quinton is an author and full-time mom living in Summerville, SC. She enjoys writing (and reading!) sexy, historical romances. She lives with her husband, two boys, three cats, and one dog. In her spare time, she likes to go camping, hiking, and canoeing/kayaking… And did she mention reading? When she’s not reading or traveling, she likes to make jewelry, sew, knit, and crochet (Yay for Ravelry!).