Today on First Kiss Friday, I’d like to bring you back to my hero, Lord Nicholas Lacy, and heroine, Grace, Lady de Courtenay in A Kiss For Charity. In this scene, we find my couple meeting at a masquerade ball at Vauxhall Gardens. Please enjoy this excerpt of their first kiss! Happy Reading. 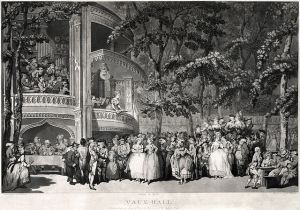 “May I have the pleasure of this dance?” he inquired politely, already knowing her answer.

Her gloved hand slipped into his and he felt as though he had waited his entire life for her to say yes. Yes to the dance. Yes to anything else he might propose, be it for one night or something they might both wish to be a longer commitment.

She was an accomplished dancer. He had already witnessed her talent, yet it was far more pleasurable to watch her when she was now his partner instead of another. He wished to know who she was, but the fast paced dance was hardly a place to carry on a meaningful conversation about getting to know one another.

Was it two dances later or maybe three? Nicholas lost track of time but finally, he placed his hand about the lady’s waist to expertly guide her out into the garden. It had been some time since he had allowed himself the pleasure of enjoying a woman’s company, especially in the moonlight.

The evening was cool, and when he saw her shiver, he shrugged out of his jacket since he had left his cape behind in the supper box. He placed the garment about her shoulders. She took ahold of the lapels and brought it closer. He swore he could hear her sniff the edges as if she were going to commit to her memory the smell of his cologne once he was gone.

Nicholas reached out to remove her mask so he could finally see all of her features.

“No.” She held out her hand to stop his efforts. “The domino stays in place if you wish me to remain here with you.”

“It is,” she answered quietly.

Nicholas did not remember it being this difficult to kiss a lady in the moonlight, but she must desire to be with him, too, else she would not be standing outside with him now. He could no longer stand the distance between them. Surely some form of spell had been cast upon him to be acting so rashly.

“Who are you?” he asked, taking ahold of both her arms and bringing her closer.

“How else am I to call upon you tomorrow if I know not your name tonight, my lady?”

This unknown woman who teased his senses gave a careless shrug but took a step closer. She placed her hand upon his chest. “Let it be enough that for tonight I am free to do as I please.”

He grinned at her response. One moment Nicholas was staring into her mask and brown eyes, and the next he was lowering his mouth to meet her lips.

Grace was unsure if it was the moonlight that drove her to such reckless behavior or the thought of having just one moment in time to treasure with a man who wanted to be with a mysterious, and perhaps, desirable woman. In either case, nothing prepared her for the instant their lips met. She supposed that since she did not protest going down the garden path with him that this would be the natural course of what would happen next. But still… surely she was slipping at the very brink of tasting heaven itself from their first kiss.

Such a kiss was at first like an introduction when his mouth slowly slid over hers as though he were searching for some hidden meaning to their attraction to one another. There was nothing demanding or urgent in seeing the matter over and done with. No, the kiss was a mingling of breaths. It was two souls connecting in the night. A simple kiss, yet there was nothing simple about it. He stopped as quickly as he started then stared into her eyes, yet she knew the domino hid her features well enough that he would be unable to identify her in the light of day.

Adrian would be mortified if he had any idea what she was up to with a complete stranger. Thinking of her brother conjured an image of her deceased husband. Although his kisses had been pleasurable, they could not compare to what this stranger made her feel.

“Tell me who you are,” he urged again. He tucked a stray lock of hair behind her ear that had fallen from her coiffure and then cupped her cheek. “You must tell me.”

She leaned into his palm. The sensation of his thumb tracing her skin had her resolve weakening but not enough to reveal her identity. “I cannot, for I will not have you think less of me from my actions here this night. I am not what I seem.”

“I see a desirable woman I wish to get to know better,” he declared with a grin and an appreciative glance at her heaving bosom. There was no way she could mistake his meaning given the proximity of their bodies and the bold glare he gave her down the length of her body. 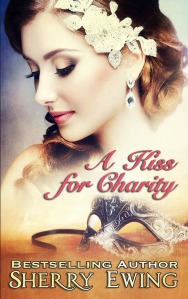 A Kiss For Charity

Love heals all wounds but will their pride keep them apart?

Young widow, Grace, Lady de Courtenay, is more concerned with improving her mind than finding another husband. But how was she to know that a close encounter with a rake at a masquerade ball would spark her interest and make her yearn for love again?

Lord Nicholas Lacey has been on his own for far too long after losing his wife in a tragic accident. After a rare trip to a masquerade, his attention is captivated by a lovely young woman. Considering the dubious company she keeps, perhaps she might be interested in becoming his mistress.

From the darkened paths of Vauxhall Gardens to a countryside estate called Hollystone Hall, Nicholas and Grace must set aside their differences in order to let love into their hearts. It will take more than a dose of holiday cheer to see these two on the road to finding their happily-ever-after and a kiss for charity may just be what they both need.