Welcome to another First Kiss Friday. It’s always a pleasure when I can help any of the Bluestocking Belles celebrate their latest release. Today, I the fabulous Caroline Warfield and the first kiss scene from The Unexpected Wife. Happy reading and enjoy! 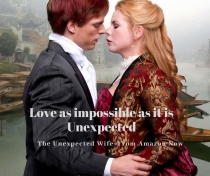 Sometimes a kiss is long in coming. It arrives only after false starts, tentative approaches, and fraught moments. This is one of those moments.

Excerpt: At the mention of Jarratt, her stomach clenched, and a vile taste crept into her mouth. “What else?” she rasped.

Charles looked down. His sigh sounded deep and weary. “Elliot fears the Chinese response will eventually ensnare an English user or dealer. If they arrest someone or threaten violence, he may be forced to act.”

If Thorn is as closely allied to the opium dens as Jarratt implied—and out of his senses from the narcotic—he could be—cow turds!

“Charles, I have to get to my brother. I can’t leave him in Jarratt’s circle.”

The duke’s eyes held hers until she felt him boring into her soul. He put out a comforting hand, and she gripped it to steady herself. “How exactly do you propose to do that, Zambak?” he asked.

“Jarratt said to come back. I’ll go tomorrow. He implied Thorn might be well, might be willing to come with me.”

She stiffened in outrage for a moment before Jarratt’s face leered at her in memory, and she sagged toward Charles. When he cupped her cheek with one hand and searched her face, she thought for a moment he meant to kiss her. Absurd. Charles is a married man, and we’re friends. Only friends.

“We’ll go together, Zambak. We will get Thorn help together.”

Together. Relief flooded her. She had thought that accepting help made her weak, but the tenderness in the duke’s eyes gave her strength. 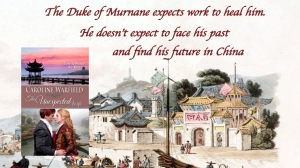 About the Book: The Unexpected Wife

Crushed with grief after the death of his son, Charles Wheatly, Duke of Murnane, throws himself into the new Queen’s service in 1838. When the government sends him on an unofficial fact finding mission to the East India Company’s enclave in Canton, China, he anticipates intrigue, international tensions, and an outlet for his frustration. He isn’t entirely surprised when he also encounters a pair of troublesome young people that need his help. However, the appearance of his estranged wife throws the entire enterprise into conflict. He didn’t expect to face his troubled marriage in such an exotic locale, much less to encounter profound love at last in the person of a determined young woman. Tensions boil over, and his wife’s scheming—and the beginnings of the First Opium War—force him to act to rescue the one he loves and perhaps save himself in the process.

Zambak Hayden seethes with frustration. A woman her age has occupied the throne for over a year, yet the Duke of Sudbury’s line of succession still passes over her—his eldest—to land on a son with neither spine nor character. She follows her brother, the East India Company’s newest and least competent clerk, to protect him and to safeguard the family honor. If she also escapes the gossip and intrigues of London and the marriage mart, so much the better. She has no intention of being forced into some sort of dynastic marriage. She may just refuse to marry at all. When an old family friend arrives she assumes her father sent him. She isn’t about to bend to his dictates nor give up her quest. Her traitorous heart, however, can’t stop yearning for a man she can’t have.

Neither expects the epic historical drama that unfolds around them.

Buy Link:
The Unexpected Wife, is now available for kindle only on Amazon. Print release is coming shortly. 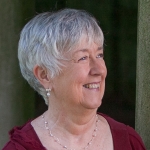 Traveler, would-be adventurer, former tech writer and library technology professional, Caroline Warfield has now retired to the urban wilds of Eastern Pennsylvania, and divides her time between writing and seeking adventures with her grandbuddy. In her newest series, Children of Empire, three cousins torn apart by lies find their way home from the far corners of the British Empire, finding love along the way.

She has works published by Soul Mate Publishing and also independently published works. In addition she has participated in five group anthologies, one not yet published.

For more about the series and all of Caroline’s books, look here: