Today on First Kiss Friday I’d like to welcome back my dear friend, Caroline Warfield who will be sharing an excerpt from her upcoming release, The Unexpected Wife. Before this scene, Charles has gone missing inside the city of Canton, forbidden to foreigners, for three days. Happy reading and enjoy!

One other thing took shape and came into focus so sharply she couldn’t turn away. She loved Charles Wheatly, heart and soul. A desperate laugh, half sob, half hysteria escaped her at the thought. She finally fulfilled her mother’s fondest wish and found a man she could respect and love—one that offered little hope of a respectable future. She had no idea what to do with the thought. As it turned out she had little time to consider it.

“Who is here?” Charles demanded. He stood outlined in the light from oil lamps in the corridor behind him. Caught between love and fury over the fear he caused, she flung herself from the chair.

“Thank God!” She didn’t know whether she would hug him or slap him until she threw herself into his arms and was being kissed senseless.

He pulled his lips from hers and kissed his way down her neck. “What is this foolishness?” he asked against a tender spot beneath her right ear. His gentle hands began to roam.

She captured his mouth again, invading before he could object. “Where have you been?” she asked between moans of pleasure, “Don’t ever frighten me like that again.”

He shifted and pulled her closer, kissed her more deeply. She felt one of his hands, warm against her skin, slip under her lose jacket.

Zambak melted against him, but reality intruded as the initial heat subsided. “You stink!” She pulled back a few inches, his arms still holding her, and wrinkled her nose.

“I slept behind a tannery last night, in an alley ridden with some dubious substances. I meant to clean up before reporting to you.”

She pulled away reluctantly, one hand clinging to his, and picked up a candle from his bedside to light it from one of the oil lamps in the hall. She looked him up and down with disgust, put the candle down, and began undoing the heavy robe. “Let’s get you undressed,” she said setting words to action.

“Lady Zambak Hayden how inappropriate—and how utterly delightful,” he said allowing her to have her way with him. The outer robe hit the floor and she kicked it to the corner. She began undoing the fasteners on his shirt, but he brushed her hands aside and pulled it over his head. “I’ve ordered a bath, will you help me with that too?”

Heat surged through her at the image he conjured. Her face burned momentarily, but the sight of the seeping bandage on his arm sent ice water through her. “My God, Charles, you’re hurt!”

“It probably needs to be looked at, but I wanted to clean up first.”

She unwound the filthy strip of cloth, cringing at the seeping wound running almost the length of his upper arm. “Cow slop! This can’t wait. You spent the night in filth.” She punched his shoulder then.

“Stupidity. This could fester and I’ll have to fear for you all over again.” 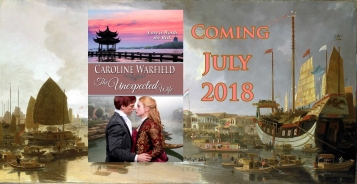 About the Book: The Unexpected Wife

Crushed with grief after the death of his son, Charles Wheatly, Duke of Murnane, throws himself into the new Queen’s service in 1838. When the government sends him on an unofficial fact finding mission to the East India Company’s enclave in Canton, China, he anticipates intrigue, international tensions, and an outlet for his frustration. He isn’t entirely surprised when he also encounters a pair of troublesome young people that need his help. However, the appearance of his estranged wife throws the entire enterprise into conflict. He didn’t expect to face his troubled marriage in such an exotic locale, much less to encounter profound love at last in the person of a determined young woman. Tensions boil over, and his wife’s scheming—and the beginnings of the First Opium War—force him to act to rescue the one he loves and perhaps save himself in the process.

Zambak Hayden seethes with frustration. A woman her age has occupied the throne for over a year, yet the Duke of Sudbury’s line of succession still passes over her—his eldest—to land on a son with neither spine nor character. She follows her brother, the East India Company’s newest and least competent clerk, to protect him and to safeguard the family honor. If she also escapes the gossip and intrigues of London and the marriage mart, so much the better. She has no intention of being forced into some sort of dynastic marriage. She may just refuse to marry at all. When an old family friend arrives she assumes her father sent him. She isn’t about to bend to his dictates nor give up her quest. Her traitorous heart, however, can’t stop yearning for a man she can’t have.

Neither expects the epic historical drama that unfolds around them.

The Unexpected Wife, will be released on July 25.

Traveler, would-be adventurer, former tech writer and library technology professional, Caroline Warfield has now retired to the urban wilds of Eastern Pennsylvania, and divides her time between writing and seeking adventures with her grandbuddy. In her newest series, Children of Empire, three cousins torn apart by lies find their way home from the far corners of the British Empire, finding love along the way.

She has works published by Soul Mate Publishing and also independently published works. In addition she has participated in five group anthologies, one not yet published.

For more about the series and all of Caroline’s books, look here: