Welcome to another First Kiss Friday. I’m always excited when my guest Jude Knight has a new book out (currently up for pre-order) and we get a look into the incredible world she creates. This excerpt is from The Realm of Silence. Gil and Susan are pursuing Susan’s missing daughter up the Great North Road. This morning, they are having breakfast in the garden of the inn before resuming the chase. They are discussing where to stay when they reach Edinburgh. Happy reading and enjoy! 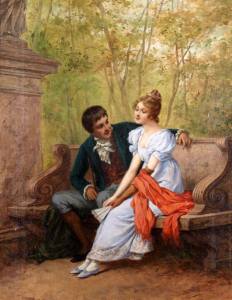 “Best we take rooms at the coaching inn our runaways are headed to,” Gil agreed. “If Mademoiselle Cornillac follows her usual practice, she’ll talk about the next day’s destination to the ostlers, and we’ll know where to head.”

“Unless Edinburgh is her destination.”

“Even so. Someone at the inn may have overheard something, or your clever daughter may have found a way to leave a message. We start at the inn.” The pie Gil had chosen was filled with eggs and cubes of ham, potato, and carrot. He savoured the flavours then took another bite, relishing the crispness of the pastry.

Susan was washing her turnover down with a swallow of ale, shifting impatiently as her hands inched towards the knife and fork she had placed on her plate between mouthfuls, as proper table etiquette required. Her inclination to rush the meal and be on her way was clearly at war with her training in manners.

“Relax, Susan. A few minutes will make the world of difference to your digestion, and very little to our arrival time.”

What a valiant creature his Goddess was. She managed a smile, though it didn’t reach her eyes. “I know you are right, you annoying man. I will try not to worry and to be patient.

“You are thinking I have no notion what you are suffering, and you are right. I have never been a father and have never had to wait and worry about a child of my flesh.” Gil almost left it at that, but then he took a deep breath and spoke the rest of his thought. “But I have been an officer with men I loved and who loved and trusted me, and I have had to send them into danger knowing that some of them will be killed and others wounded. That perhaps gives me a small inkling of your feelings, Goddess.” He winced as the last word slipped out. She hated when people called her that, but it was how he felt. He had worshipped her from the moment he met her as a boy; carried a candle before her image in his heart since that day; held her as a beacon of the best of English womanhood through a thousand engagements on four continents and any number of islands.

She was oblivious to his preoccupation, considering what he had said. “I had not thought about it like that. Yes. I imagine you were a father, or at least an elder brother, to your men. My brothers are the same. It is similar, Gil. So, you know how hard it is.”

Susan called him Gil, he noticed, when she was moved, just as he slipped into calling her Goddess. He did not call her attention to the slip, but when he moved her chair back to help her rise, and she stepped to one side almost into his arms, he could not resist wrapping them around her.

He had intended a brief peck on her hair. She lifted her mouth as if she had been waiting for just such a move, and he was lost. She was all that existed. The elusive scent of her saturated his nostrils, her yielding curves filled his arms, and her lips and mouth consumed all of his thoughts as he tenderly explored them.

How long the kiss lasted he had no idea, but when she stiffened and pulled away, he let her go immediately, sense rushing back into his brain and berating it for the most arrant stupidity. She didn’t comment—wouldn’t even meet his eyes—but led the way out of the garden, almost running in her hurry. 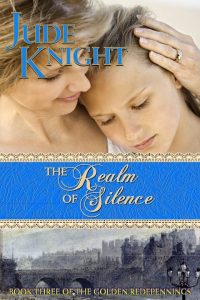 The Realm of Silence

(Book 3 in the Golden Redepennings series)

Rescue her daughter, destroy her dragons, defeat his demons, go back to his lonely life. How hard can it be?

“I like not only to be loved, but also to be told I am loved…  the realm of silence is large enough beyond the grave.” George Eliot

When Susan Cunningham’s daughter disappears from school, her pleasant life as a fashionable, dashing, and respectable widow is shattered. Amy is reported to be chasing a French spy up the Great North Road, and when Susan sets out in pursuit she is forced to accept help from the last person she wants: her childhood friend and adult nemesis, Gil Rutledge.

Gil Rutledge has loved Susan since she was ten and he a boy of twelve. He is determined to oblige her by rescuing her daughter. And if close proximity allows them to rekindle their old friendship, even better. He has no right to ask for more.

Gil and Susan must overcome danger, mystery, ghosts from the past, and their own pride before their journey is complete.

She writes historical novels, novellas, and short stories, mostly set in the early 19th Century. She writes strong determined heroines, heroes who can appreciate a clever capable woman, villains you’ll love to loathe, and all with a leavening of humour.