Welcome, my lovelies, to another First Kiss Friday. It’s my pleasure to bring back fellow Bluestocking Bell, Jude Knight and an excerpt from A Raging Madness. In this excerpt, Ella has just shown Alex, who has been invalided out of the army, a path to a possible future. What starts as a spontaneous thank-you develops into more. Happy reading and enjoy!

Alex said nothing for a moment, and in the silence, she remembered he was an earl’s grandson. “I suppose you cannot, can you? Gentlemen do not go into trade.”

But his voice in the darkness was rich with warmth and excitement. “This gentleman can and will. That’s a marvellous idea, Ella. And I would not need to beg from Rede and Anne. I have money of my own. They paid me for being a human pincushion in the stead of my Distinguished Personage. They would have preferred me to die, I think, since a posthumous medal would have been cheaper, but I pleased myself instead of them, and so they gave me a reward. I have a good sum invested, and it is growing larger thanks to my cousin’s gift for making money.”

The sound was Alex shifting and dropping to the floor. Before she was aware of his intent, he was bending over her. Perhaps he meant to kiss her cheek, but she had turned her face towards the sound of his movement, and his lips dropped on her mouth, paused, and then moulded themselves to hers.

She had been right to be afraid. One touch of his lips and she burned for more, shifting to allow him better access, opening her mouth to welcome his invading tongue. No. Not invading; no conquering assault to batter down her defences, but a long-awaited and cherished caress that set her aflame, so she moaned and locked her hands behind his head to prevent his escape, and he stretched above her on the narrow bed and placed his own hands gently either side of her face.

“Ella,” he said, into her open mouth, and crushed his lips to her again before she could speak, though what would she say? Alex? Yes? Stop? 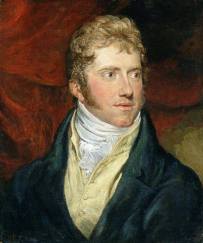 He was aroused. Though he took most of his weight on his elbows and his knees, still the length of him poked into her belly. If she shifted, even a little, it would rub the place that burned. Only the cotton of her shift and his shirt kept them apart, and all the good reasons for not lifting both garments out of the way had melted in the heat of his kiss.

Thoughts scattered. She pushed herself up against him, her nipples so hard the cotton hurt, and it was a good hurt, like the burning he both relieved and heightened as he rubbed his male organ against her, setting her squirming and moaning.

Suddenly he moved, sliding down the bed to nudge her shift sideways down one arm, freeing one breast, and seizing on the nipple with his mouth, his teeth, his tongue.

She moaned again, helpless to keep the sound from escaping, as he used one hand to tease the other nipple, and the other to gather the hem of her shift until her woman’s place was uncovered, and his hand was doing delicious things that narrowed her world to him. To Alex, and his hands and mouth and body, and what was happening to hers.

Alex tensed suddenly and raised his head, his hands stilling. Ella suppressed a whimper, caught and subdued the involuntary movement to draw him back, surfaced from the sea of sensation, and finally heard what he had heard. Voices, speaking low. Footsteps. The soft clap of a hand on the roof of the cabin—Jonno’s nightly salute, too soft to wake them but a signal they heard more evenings than not.

Jonno and the O’Haras were back from the tavern, and the spell was broken. 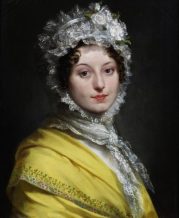 She dropped her hands from his shoulders, tried to cover her breast and pull down her hem, and blushed furiously in the dark. “I am so sorry, Alex,” she said. Though whether she was sorry to stop or sorry they had ever started, she had no idea.

After a moment, he pulled away, swinging his legs around so that he sat beside her on the bed.

“I am not that kind of woman,” she said, trying to sound convincing to herself when her whole body was screaming to complete what they had begun.

“Right.” He sounded strained. He sucked a breath in, then let it slowly out through his teeth.

“I cannot apologise enough…” Ella began, but Alex interrupted, his voice as courteous as ever, though strained.

“The fault is mine, Ella. I meant only to salute you for the gift of my future, and I forgot myself. I…” He stopped and took another deep breath. “I cannot bring myself to apologise. For any impression of disrespect, yes, indeed. I beg your pardon with all my heart if I have offended. But for offending you, not for kissing you.” He stood, and moved away from the bed. She could not make out what he was doing, but he had not returned to his own bed.

“It was everything I have dreamed this age,” he said, almost under his breath. This age? He had been dreaming of kissing her this age?

But she had to correct his misapprehension. “Each other,” she said.

Whatever he was doing—it sounded as if he was putting on his boots—he stopped. “Each other?”

“We kissed each other,” she explained.

The amusement was back when he replied. “We did, and very nicely, too.”

“And we cannot do it again,” Ella warned, hoping her regret was not obvious.

“No, I suppose not. I am going to take a short walk, Ella. I won’t go far, but the cold will be… beneficial.”

He had opened the hatch and was leaving before she spoke again, giving him a gift of words in return for those he had given her.

“It was better than I dreamed.”

His only response was a catch in his step before he continued, but a few minutes later, he began to whistle as he walked the canal path. It took her only a few bars to recognise the tune, and she smiled in the dark, mouthing the lyrics in time to his whistling.

Their marriage is a fiction. Their enemies are all too real. 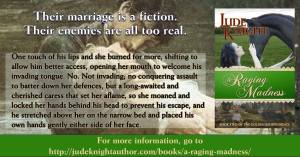 “Envy is a raging madness that cannot bear the wealth or fortune of others.”
François, Duc De La Rochefoucauld

Ella survived an abusive and philandering husband, in-laws who hate her, and public scorn. But she’s not sure she will survive love. It is too late to guard her heart from the man forced to pretend he has married such a disreputable widow, but at least she will not burden him with feelings he can never return.

Alex understands his supposed wife never wishes to remarry. And if she had chosen to wed, it would not have been to him. He should have wooed her when he was whole, when he could have had her love, not her pity. But it is too late now. She looks at him and sees a broken man. Perhaps she will learn to bear him.

In their masquerade of a marriage, Ella and Alex soon discover they are more well-matched than they expected. But then the couple’s blossoming trust is ripped apart by a malicious enemy. Two lost souls must together face the demons of their past to save their lives and give their love a future.