Welcome to another First Kiss Friday! It’s always a pleasure when I have author Caroline Warfield on my blog. Today, Caroline is sharing the first kiss scene from The Reluctant Wife. Happy reading and enjoy!

In The Reluctant Wife, Clare and Fred come together slowly, but with an inevitability that pulls readers along with them. This is their first gentle kiss. It occurs while they are searching for his runaway children and he is truant from a disciplinary hearing. As Clare would later note, she would endure the remembrance of his tender embrace, his thumb rubbing the back of her neck, and the kiss to the side of her head for many months.

They searched down the middle of the park as one, but they had as little luck as before, and the first signs of night crept up with the sunset. Fred’s steps slowed until he could go no farther, and he leaned back against a date palm and closed his eyes in exhaustion.

I should get this woman home. The Davis dragon will be having six kinds of fits. He couldn’t make himself move. He needed her calm, her strength.

The feel of Clare’s hand on his arm, a gesture of comfort, proved too much for Fred’s self-control. He pulled her into his arms, a slow gentle embrace she didn’t resist, and lay his head against hers where it tucked perfectly against his shoulder, breathing deeply of her lavender scent and the sweet smell of a woman who had labored on his behalf in the heat of the day.

“We’ll find them, Captain. You mustn’t despair,” she murmured. She sagged against him in exhaustion.

He kissed a spot above her ear. “Fred. We’ve been partners all day. Could you dispense with rank? We’re comrades in this pursuit.”

“Fred then.” He thought he felt her smile against his shirt.

Comrades. Except she has a ship waiting in the morning, and I’ll— I’ll be under guard by noon tomorrow. There had been a hearing set for two o’clock that afternoon; he hadn’t even sent word about why he was detained. They wouldn’t have cared.

The two of them stood, he leaning against the tree, she leaning against his chest, for long moments while the sky around them changed from pale orange to a deeper shade and then to purple. He knew he would face failure and regret, though he hoped he could quickly resume his desperate search—or send Singh if he had to. For now, he just wanted to hold the woman who came when he needed her.

I shared a far steamier kiss from later in their journey on First Kiss Friday once before.  You can find that excerpt here. 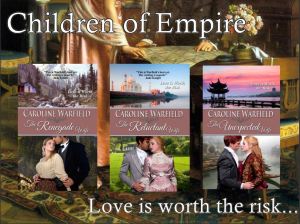 The Reluctant Wife is Book 2 in Caroline Warfield’s Children of Empire Series.

Three cousins, who grew up together in the English countryside, have been driven apart by deceit and lies. (You may guess a woman was involved!) Though they all escape to the outposts of The British Empire, they all make their way home to England, facing their demons and finding love and the support of women of character and backbone. They are:

Who are their ladies?

Book 3, The Unexpected Wife, will be released on July 25.

For more about the series and all of Caroline’s books, look here:https://www.carolinewarfield.com/bookshelf/ 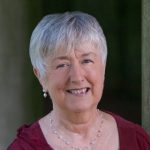 Traveler, poet, librarian, technology manager—award winning author Caroline Warfield has been many things (even a nun), but above all she is a romantic. Having retired to the urban wilds of eastern Pennsylvania, she reckons she is on at least her third act, happily working in an office surrounded by windows while she lets her characters lead her to adventures in England and the far-flung corners of the British Empire. She nudges them to explore the riskiest territory of all, the human heart.

Caroline has an active blog and her newsletter list recently zoomed past 3000.  She is a RONE award winner and has five star reviews from Readers’ Favorite, Night Owl Reviews, and InD’Tale. She is also a member of the writers’ co-operative, the Bluestocking Belles. With partners she manages and regularly writes for both The Teatime Tattler and History Imagined.