Welcome to another First Kiss Friday. Today I’m featuring… well… myself and my first kiss scene between Neville Quinn, Earl of Drayton, and Lady Gwendolyn (Worthington) Sandhurst from Nothing But Time: A Family of Worth (Book One). In this scene, Gwendolyn’s younger brother Brandon has arranged for her to meet Neville and have a quiet dinner together. Such a mischievous brother, right? Happy reading and enjoy!

The door shut behind him, leaving her alone with Neville. The draperies to the room were closed allowing the outside world no admittance to the intimate setting within. She shivered, not from fear, but more that she was actually here… with him.

“You came,” his throaty words, uttered softly in her ear, had her resisting the urge to lean back into his body that was almost touching her backside.

“Yes, I came. I know I should have remained at home, but here I am.” She turned to face him.

“I am pleased you decided to join me,” he declared holding out his hand. “May I?”

She reached up to take his outstretched fingers. He took hers and gently tugged at her glove before putting it into his jacket. “Something for me to always remember you,” he whispered, before raising her hand to place a kiss on the inside of her wrist, “not that I could ever forget you.”

“Nor I you, Neville.” She could feel her eyes glistening over with unshed tears. The warmth of his hand in hers was almost her undoing. Until this very moment, she had not been aware how much she craved even the gentlest of touches from another.

“Come, you must be famished,” he urged, ushering her to the table. “If you will permit me, I will be your most obedient servant this evening.”

“Really? Obedient? Such a vow could land you in trouble, my lord,” Gwendolyn teased.

“I was in trouble the moment I first discovered you at luncheon that day, let alone when I walked through your brother’s door.”

“I do not regret meeting you here, Neville.”

Neville held out her chair and Gwendolyn sat down into the cushion. His hand came to rest lightly upon her shoulder and she reached up to give it a slight squeeze. He went to the sideboard and began putting an assortment of food upon their plates before setting hers at her place on the table. With the wine poured, they began to eat in silence for several minutes, each lost in their own thoughts.

“Tell me of yourself,” Neville asked, before taking a sip of his wine.

“What is there to tell? I had a normal upbringing, most likely similar to your own. Being the daughter of a duke does have certain responsibilities or opens many doors if you have need of something.”

“And what do you stand in need of now?”

Gwendolyn sighed. “That is a difficult question to answer, for there are many things I wish were different in my life. I know I should not speak of it, but my marriage is a shambles and hardly one you read about in a romance novel.”

“I would not have our conversation upset you, Gwendolyn. You need not speak of your marriage,” Neville replied, reaching across the table for her hand. 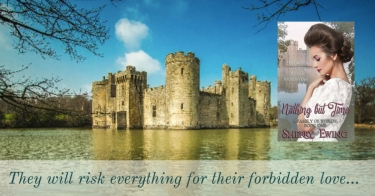 “How can I not? I do not mean to be a bore, but you must understand that for me to be here with you, alone, is completely out of character. I do not make a habit of late night trysts with men I barely know. Betraying my husband will surely land me in hell.”

“Then we will go there together. Let me also confess I do not make a habit of stealing another man’s wife. Yet, you must admit there is something between us that cannot be explained. I know you feel it, too.” Neville pushed back his chair, took her hand and led her to a settee. She began to move to one side but he would have none of it. “Do not go so far away. I would have you close to me. You are mine… at least for as long as this night will allow us.”

His hand continued to hold onto hers and she gave up any further protests that may have spilled from her lips. They would have been falsehoods and there was no sense lying to the man who was tearing down the last defenses to her heart.

She raised her eyes to meet his. There was so much promise hidden within the depths of those piercing hazel orbs. “I can never truly be yours, Neville, just as surely as you can never be mine.”

“We have nothing but time this night, Gwendolyn,” he murmured, leaning forward he pressed a kiss upon her temple.

“Time… this evening will pass too swiftly, and then I will once more be returned to the nightmare of my life.”

“Then do not think of what the morrow will bring. Tonight, I will keep you safe at my side.”

Gwendolyn leaned her head upon his shoulder and he put his arm around her. Safe. He was like a boat anchor keeping her grounded whilst the waves crashed against the shore, attempting to pull loose the ropes that would keep her moored to a dock. Yet, the reality of her life remained with her and her conscience would not let go of the values she had adhered to all her life.

She leaned back to look up at the most handsomest man she had ever beheld. “I cannot become your mistress, Neville,” she confessed. He stroked his hand through her hair so gently she almost burst out into tears at the injustice of it all.

“I know,” he whispered, before leaning down to give her their first kiss. 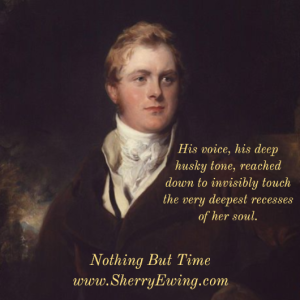 Neville held Gwendolyn in his arms and swore he wished never to let her go. He deepened their kiss and a fire erupted in his loins he would be hard pressed to put out. If she only knew what she did to him with the simple gesture of cupping his face, she would have run from her brother’s house and never looked back. What had they gotten themselves into?

He broke off their kiss and disappointment flashed in her eyes. “Do not stop, Drayton,” she murmured seductively.

Neville smiled knowing from the use of his title she was miffed at him. “I cannot take much more, my sweet Gwendolyn.” He pressed forward to nibble on her pouting lower lip. “I am only a man after all, and your sweet charms will be my undoing if we continue.”

She put her arms around his neck and pulled. “Just one more. Make me forget everything else but you.”

Neville groaned and gave in to her demand. How could he not, when she begged him for another kiss? He pressed her down so she was lying on the settee, but when their bodies molded together as one, her eyes flew open wide. There was no way to hide his arousal pressed intimately against her.

The grin he gave her must surely appear wicked. If he did not know better, he would have said her reaction was virginal, but surely that could not be the case? She was a married woman and must know what she was doing.

Nothing But Time
A Family of Work: Book One

You can learn more about Nothing But Time by clicking on the Book tab above. Thanks for stopping by today and be sure to leave me a comment! I hope you enjoyed this excerpt.