It’s First Kiss Friday and I’m wrapping up a month of giving back to the San Francisco Area Chapter of Romance Writers of America by featuring some of their authors. Today’s guest is Amanda J. Clay with her first kiss scene from Lies in the Darkness. Get out your fan and happy reading! 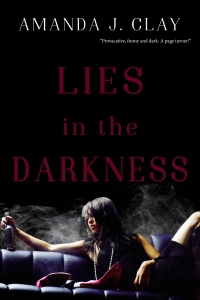 Sophie was leaning up against the oak tree in the backyard trying to sort through what had happened inside. She’d been groped by some douche bag frat boy—nothing new. But Davis had flown to her rescue like a possessive pit pull, only to turn on her a moment later. What was going on with him? Moreover, why did she even care what was going on with him? Davis Thomson was a thorn in her ass and had been since Waverly. She shouldn’t give two shits about his schizophrenic behavior.

“Hey there,” a gritty twang struck a chord in her ear. Sophie jumped and turned to see Davis strutting toward her, a bottle of Fireball whiskey in hand.

“Thought you were a Bacardi man,” Sophie said dryly, eyeing the bottle but not bothering to make eye contact.

“Ran out. And ya know I’ve been known to take what I can get. At least that’s what the rumors say.” His Elvis lip curled at the corner.

“You alright out here?”

Sophie sighed and leaned against the Oak tree. She sipped on her Pacifico and tried to avoid catching that smoky gaze of his—the gaze that seemed to slither over her skin.

“Yeah, just needed some air. Things were a little tense in there.”

“Um, I’m sorry for what I said …” Davis started but his words trailed off. He took another swig from the whiskey bottle.

“It’s ok. I should have given you some credit for knocking that asshole down. Thanks, I guess.”

“What’s your problem with me?”

“Yeah, problem. Why is everything I do such an insult to you?”

“Whatever. I can’t even talk to you.” Sophie shook her head and turned to focus on anything other than him.

“You really don’t get it, do you?” Davis laughed with the lilt of liquor on his voice.

Sophie groaned into the air.

“Get what? Get how you think you think I’m such a fucking disaster? Join the club.”

“Get how I feel about you!” he snapped.

“What are you talking about?”

Davis sighed and raked his hand through his dark hair. He took another swig of Fireball.

“I should fucking hate you, you know that? You’re selfish and you toy with people’s emotions. You nearly destroyed one of my best friends. You have the worst fucking judgment of anyone I think I’ve ever met.”

“Wow, thanks for that glowing review. Are you done?”

“How drunk are you?”

“Pretty fucking drunk!” Davis rubbed his jaw. “You know, you act like everything is so damn hard for you when every problem you have is completely self-inflicted. You’re your own worst enemy, Sophie. You should be the last person I should ever want to … want to …”

The world stopped around her as something pent up and fuming fled to the surface of Davis’ face. His firm jaw clenched and his shoulders rose and fell with heavy breath.

“Want to what?” she nearly whispered.

Davis took another aggressive step forward and grabbed her wrist. He pulled her closer to him until she could feel his hot, cinnamon breath on her cheek. His smoky eyes burned a hole through her chest.

“Want to this.” His lips were suddenly crushing hers. She nearly fell backward with the force of his mouth, but his arm wrapped around her waist to steady her. His tongue pressed against her lips until they parted and welcomed him deeper. Whiskey, cigarettes and cinnamon filled her mouth as he tasted her. He pushed his body into hers until her back was against the tree, the sharp bark digging into her skin through her thin tank top. His hands pressed against the tree as his hips dug into her sides and she could feel the extent of his desire pressing through his jeans against her. It was everything wrong and everything right tangled together in a confusing mess. One hand found its way to her waist and squeezed her body deeper into his as his tongue explored every inch of her mouth. She moaned against his lips as an unfamiliar flame roared at her center.

Then like the rip of a bandage, he pulled away. Nearly stumbling, she stood gushing and vulnerable in the darkness.

Davis stepped back and Sophie struggled for breath. For a moment, he said nothing as he searched her eyes. Sophie touched her fingertips to her swollen lips and searched herself for something to say.

He stroked the line of her jaw and shook his head slowly.

“You don’t have to say anything. Just … let’s just leave the moment as it is.” He leaned in and kissed her forehead, then turned and walked back to the house. Sophie collapsed to her knees and began to sob.

Sophie DeLuca used to be a nice girl—but that was before Luke Lamanuzzi tore her heart to shreds. Now she’s a walking trail of vodka-soaked destruction, something her sexy, smooth-talking coworker Davis won’t let her forget. He might have a secret crush on her—but his playboy reputation would never let him admit it. His best friend Blake’s own love of all-nighters and debauchery comes crashing to a halt when a one-night stand backfires. Level-headed Cassie seems like she’s the one who has it all together, but she’s just better at hiding her skeletons.

Ungracefully pirouetting in and out of love triangles, drug addictions and unwanted pregnancies, four friends stumble their way through their last year of study and try to grasp the realities of the world on the other side.

Author Bio:
Amanda J. Clay is a writing YA and Adult fiction from Dallas, TX. A California native, she had a fantastic time studying English and Journalism at Chico State University and then a very serious time slaving away for a Master’s degree in Communications from California State University, Fullerton. When she’s not staring at a computer screen, she spends most of her spare time on some new fitness addiction and plotting world adventures.

She is the author of Lies in the Darkness and Rebel Song.