Today I would like to welcome my guest Ariella Moon. Ariella and I are swapping blogs today to feature our latest releases. Read on for an excerpt from Ariella’s latest novel, The Amber Elixir. Isn’t her cover just stunning? 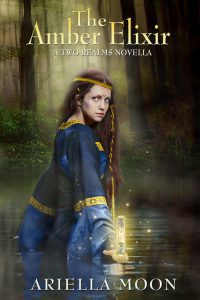 Glynis, a priestess of Avalon, Viviane’s handmaiden and more, shook her head. “All this because you stole Merlin’s spell book.”

“Merlin challenged me to steal the tome, remember? I bested him, and he retaliated by imprisoning me in ice!”

Glynis’s knuckles whitened as she tightened her grip on the cloth bundle she carried. “Challenged? We are no longer nine years old, nor Merlin eleven. He is King Arthur’s Mage now, and you are the Lady of the Lake. The time for childish games has long passed.”

“Merlin encased you in ice! You could have died.” Hurt and fury tinged Glynis’s words. “For all I knew, you had died.”

“Had I not cast a spell forward in time, and brought back the one person who could free me—”

“Lady Fenella paid a high price for helping you. We all did.”

“Glynis, I—” She stepped towards Glynis, but the priestess backed away, rocking the barge. Rebuffed, Viviane breathed in the cold acrid air then rubbed her arms inside her heavy cloak. In a softened voice she said, “My remorse knows no bounds.”

“You appear unharmed.” Glynis brushed back an errant lock of her pale blond hair. “Merlin’s spell must have protected you from the cold.”

“He cast it so I would suffer…just enough to remind me he is the master, and I, the apprentice.” The memory of Merlin’s cruel punishment—his betrayal—still shivered her core.

Glynis shook her head. “After three years of formal apprenticeship—”

“It has come to this. Why did Merlin imprison you here? Surely he knew your sanctuary would be ruined.”

“’Tis the only explanation.” Viviane fumed.

“Merlin is impulsive, but he acts with purpose.” Glynis adjusted the sack. “Mayhap he wondered why you needed a sanctuary on another isle. Was Avalon not enough? Were your priestesses such disappointments, that even Avalon’s lake provided inadequate escape?”

“No lessons, no rituals fully prepared me for becoming Lady of the Lake. I came to the sanctuary to remember my roots.” She frowned as she spied a scorched stump, the sad remains of an ancient pine she used to sit beneath. Viviane’s voice fell to a husky whisper. “I clung to the part of me that is still human.”

“But your one true desire had been to become a goddess—the Lady of the Lake.”

Viviane uttered a harsh laugh. “As usual, I had not fully thought through the consequences—such as outliving the people I love.” 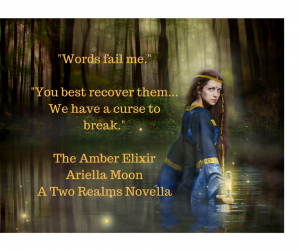 Viviane, the new Lady of the Lake and High Priestess of Avalon, accepts a challenge from Merlin unaware her bold actions will have tragic consequences. Two of her priestesses are turned to stone. A forbidden love deserts her. Now alone, she has six young handmaidens to train and protect.

When Morgan le Fay demands assistance with a spell that could change the balance of power in the Two Realms, Viviane refuses her. But what if Morgan’s secret knowledge could restore the stone priestesses? Would an alliance with the sorceress prompt Viviane’s love to return? Or will the gamble cost her all she holds dear?

Ariella Moon draws upon her experiences as a shaman to create magical Young Adult fiction. Her series include The Two Realms Trilogy, a medieval Scotland and Fairy fantasy romance, Two Realms Novellas, origin stories of characters and magic in the Two Realms, and The Teen Wytche Saga, a series of sweet contemporary paranormal romances. Ariella’s “Covert Hearts” appears in Second Chances: A Romance Writers of America Collection.

Ariella loves to hear from her readers. You can reach her at:

Find my excerpt from The Piper’s Lady within the Bluestocking Belles box set, Never Too Late here.