Any day that I can introduce my friend and fellow Bluestocking Belle Jude Knight to my First Kiss Friday blog is a really good day. Jude writes incredible stories that pull you in from page one and makes you want to start all over again when you’re done. Today Jude has an excerpt from The Lost Wife, one of her short stories in her upcoming release Lost In The Tale. We hope you enjoy this first kiss scene. Happy reading! 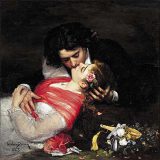 A rattle drew their attention to the kitten. It had found the saddle bags, and was batting a loose strap so that it swung and knocked two buckles together.

“Ah, Angel, thank you for the reminder,” Magnus said. “Callie, I have a Christmas present for you.”

He didn’t have to let her go—just lean across and pull the bags towards him, the kitten scampering behind, enjoying the new game. It pounced on the flap he wanted, and he picked it up and handed it to Callie while he pulled out the oilskin wrapped package he wanted.

“Here, Callie. I was going to give this to you for Twelfth Night, but I cannot wait. Merry Christmas.”

She turned slightly so she could lean against him and use both hands to unwrap the package, and he kept one arm around her while with his other hand he turned the kitten on its back and tickled its belly with the end of a saddlebag strap.

“Marcus? These are the deeds to Blessings.”

“I had them from Lewis just before I put him on a ship for South America. He will not be back, Callie. His schemes and lies and cheating are all public knowledge, and the men he has wronged are baying for his blood.”

“And now you own Blessings?”

“You own Blessings. We didn’t have time for a proper marriage settlement, and with my identity in doubt… Well, now that I am confirmed as earl, I have corrected that oversight. It is in the package. It just needs your signature. Unless you want changes. I will make any changes you wish, Callie. All I want is for you to be happy.”

Callie was crying again, but smiling as well. “You are turning me into a watering pot, Magnus.”

He bent to kiss away the tears, and when she turned further towards him to ease that gentle service, he drifted his lips across hers, at first just brushing then settling to press and caress. He urged her mouth open with his own, and brushed her tongue with his. Her tentative return thrilled through his body and he sank into the kiss, feeling at last at home, after all these years.

Sharp pinpricks and an anguished yeowl recalled him to himself, and he eased slightly away from Callie to lift an offended Angel from between them.

“Even Christmas Angels should not come between a man and his wife,” he told the kitten, sternly. Callie giggled, a happy bubble of a sound that he had heard many times long ago and missed like a lost limb. He bent to kiss her again, holding the kitten out of the way, this time.

“I don’t deserve you, Callie,” he said again. 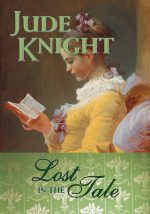 Come sample my wares: four short stories and a novella to entertain and surprise you.

The Lost Wife: Teri’s refuge had been invaded: by the French, who were trying to conquer their land, and by wounded soldiers from the English forces sent to fight Napoleon’s armies. The latest injured man carried to her for nursing would be a bigger challenge than all the rest: he had once broken her heart. (short story)

The Heart of a Wolf: Ten years ago, Isadora lied to save her best friend, and lost her home and the man she loved when he would not listen to her. Ten years ago, Bastian caught his betrothed in the arms of another man, and her guilt was confirmed when she fled. Ten years on, both still burn with anger, but the lives of innocent children and the future of their werewolf kind demand that they work together. (short story)

My Lost Highland Love: Interfering relatives, misunderstandings, and mistranslations across a language barrier keep two lovers from finding one another again. The Earl of Chestlewick’s daughter comes to London from her beloved Highlands to please her father, planning to avoid the Englishman who married her and abandoned her. The Earl of Medford comes face-to-face with a ghost; a Society lady who bears the face of the Highland lass who saved his life and holds his heart. (short story)

Magnus and the Christmas Angel: Scarred by years in captivity, Magnus has fought English Society to be accepted as the true Earl of Fenchurch. Now he faces the hardest battle of all: to win the love of his wife. A night trapped in the snow with an orphaned kitten, gives Callie a Christmas gift: the chance to rediscover first love with the tattooed stranger she married. (short story)

The Lost Treasure of Lorne: For nearly 300 years, the Normingtons and the Lorimers have feuded, since a love affair ended in a curse that doomed dead Lorimers to haunt their home, the Castle of Lorne.

Now the last Marquis of Lorne, the last of the Lorimers, is one of those ghosts, and the Duke of Kendal, head of the House of Normington, holds the castle.

Kendal doesn’t care about the feud or the ghosts. He wants only to find the evidence that will legitimate the son his Lorimer bride bore him before her death, and to convince his stubborn housekeeper to marry him.

But the time allotted to the curse is running out, and his happiness depends on finding the Lost Treasure of Lorne before the 300 years draws to a close. (novella)

She writes historical novels, novellas, and short stories, mostly set in the early 19th Century. She writes strong determined heroines, heroes who can appreciate a clever capable woman, villains you’ll love to loathe, and all with a leavening of humour.