The Piper’s Lady: The MacLarens, Book Three
A Medieval Romance

“You saved me,” she whispered in a shaky tone. “You are truly a gallant knight to rescue me. Your liege lord must value you as one of his warriors.”

Warrior? Him? He opened his mouth to correct her assumption but could not find the words. He knew she would think less of him if she but knew he was only the clan’s piper.

“Are ye harmed?” he murmured, still holding the pleasing womanly curves of the lady who had not yet moved from atop him. Her brow rose, and Garrick inwardly cursed knowing there was no way to hide his Scottish accent.

“Nay, but only because of your ability to move so quickly. Thank you, Sir…” She left her sentence linger in the air between them.

“Garrick,” he answered, giving her his name, “of Clan MacLaren.”

“My thanks, Sir Garrick,” she replied with a kind smile.

They seemed to come to the realization the lists had become eerily silent with the exception of one person running in their direction.

“Get your hands off her!” a voice bellowed.

Before either of them could move, the woman was ripped from his arms, and Garrick saw her enveloped in the fierce embrace of Morgan. Her arms wrapped around his neck, and Garrick could not help the feeling of jealousy assaulting his emotions and tugging at his heartstrings.

“Coira! By St. Michael’s Wings you gave me such a fright, woman,” Morgan scolded in concern. Setting her down upon her feet, he proceeded to clasp both her cheeks afore placing kisses on each. 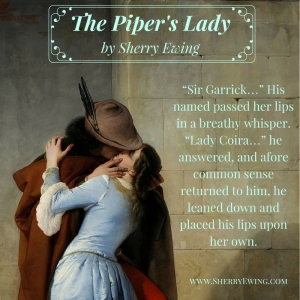