Welcome to Medieval Monday and week six of our Nature theme. Today’s guest is Ashley York who has a snippet from her novel Eyes of the Seer. Happy reading, my lovelies! 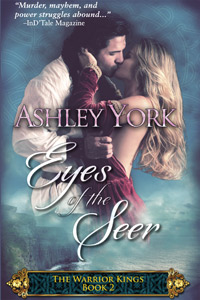 Merewyn’s willing expression flashed through her mind, but something in his eyes told her the regard he had once borne for her had not faded. He was protective of her, attentive, and not at all like her brother. He tilted his head now, his eyes squinting as if trying to read an unclear sign. And there was a good chance he could. He knew her very well. Better than she knew herself.

He wishes to prove himself…

Marcán of Clonascra bears the bloodline of Brian Boru and his prowess as a warrior has earned him great respect from everyone but Astrid, the woman who holds his heart. Between her mother’s condemning him as a pagan Seer and Astrid’s total disinterest, he finds solace as the king’s protector and confidant.

She is desperate to escape…

Astrid is more than ready to wed but her brother, the king, is in no hurry to see her married, so she decides to see to her own match-making. The man she approaches quickly reveals his lack of honor, but her overbearing mother pushes her to wed him anyway. When Astrid discovers Marcán’s love for her, will it be too late to have the happiness she’d always dreamed of?

Ready for more? Join me next week where this scene continues at Ruth A. Casie’s blog