Happy Valentine’s Day, my lovelies! Today on First Kiss Friday I’d like to introduce you to author Celeste Barclay who will be sharing her first kiss scene from A Spinster at the Highland Court. Happy reading and enjoy! 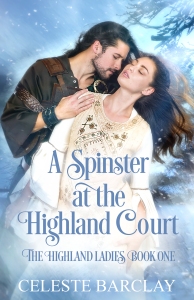 It wasn’t until Elizabeth exited the trees into an open meadow that she was sure she was being followed. She lifted her elbow again to peer under her arm, but her billowing cloak kept obscuring her view. She saw the rider gaining on her, but it was impossible to tell if he was friend or foe. She thanked the heavens she was positive her horse could outrun any other, but she was becoming uncomfortable as the gap shrank. Elizabeth tugged sharply on the left rein and steered them toward a fast-moving stream. In spring it would swell into a river, but in the winter, it was a freezing stream. Her horse entered the water with no reservation, having taken this route countless times over the years. They forded the stream as the water rose to the soles of Elizabeth’s boots. The cold water splashed over the horse’s stomach, and while she was sure it refreshed her mount, it was like shards of glass pricking through her breeches. But the wind against her face was the freedom she needed, so the momentary discomfort was a small price. She kept her body parallel to the horse’s withers as they barreled downhill. An expansive wood greeted them at the base. She led them into the trees to the right in the hopes it would buy her the chance to see who followed if the rider didn’t change direction.

Elizabeth stroked her horse between the ears and murmured to him to keep him from snorting and shaking his head. Despite the gallop, rider and horse were silent as their pursuer crested the hill and began his descent. The man seemed to be looking directly in front of him, so Elizabeth’s heart lurched into her throat when they turned to face her hiding spot.

“Don’t hide from me, Elizabeth. I’m already angrier than a shaken hive. Come out now.” Edward scanned the trees to make out a shadowy form. He’d nearly fallen from his horse in panic when Elizabeth disappeared over the crest of the hill. He was familiar with how steep the decline was, and he imagined her being thrown and trampled as her horse faltered.

Elizabeth didn’t move. She held her breath and prayed her horse would do the same. He shifted slightly, sensing her tension, and she was sure Edward saw them. When he nudged his horse into the trees, she didn’t know if she should remain still or try to flee. His words reached her, but it was his tone that made her nervous.

“Very well. You refuse to heed my directions, then I shall come to you. Don’t believe you’re well hidden. I can see you and that monster clearly.”

Elizabeth’s hackles went up with a need to defend her horse. He was only an animal, but he was her pet and her best friend. He intuited her every innermost thought and emotion since she received him as a colt. She also was irritated at Edward’s high handedness. He had no say over what she did or where she went. It was only the knowledge that he’d report her to the queen that kept her quiet. She didn’t need to add insult to injury by being rude.

Edward pulled alongside her, and before she said a word in her defense, he plucked her from the saddle. His mouth crashed down onto hers as she landed in his lap. He yanked her hood down and whipped off her cap before lacing his fingers through her hair. His kiss was punishing, and Elizabeth tasted the fear. His other hand roamed over her, but it wasn’t a lover’s caress. It seemed more like he was checking her for injury. It only softened when he was reassured she was hale. His tongue darted against the seam of her lips until she opened to him. Her moan of surprise and want had him lifting her to straddle him and his horse. When her mound came in contact with his stiff cock, it was his turn to groan. He cupped her backside as she shifted to get closer.

Elizabeth clung to his tunic as her head would surely float away. His tongue inside her mouth was strange at first, but curiosity replaced shock. Her tongue tangled with his, and some instinct told her to suck. Edward’s response was immediate. His fingers dug into her backside painfully, but she found the touch of pain exciting. The tighter she pinched her nipples when she touched herself, the faster she climaxed. The heat radiating from Edward’s chest warmed her cold fingers, and when they found their way to the laces of his collar, she slid them beneath to find scorching smooth skin. She mewled in protest when she was unable to touch more of him, so she caressed his neck and shoulders until she grazed her nails over his scalp and tangled her fingers in his hair. His responding growl vibrated through her channel deep into her core.

Edward wanted to know what secrets hid inside that soft, unyielding flesh. He wanted to strip her bare and claim her. He wanted to vow he’d protect her from anyone and everyone, including herself. He wanted to revel in how she amazed him with her fearlessness and now passion. He wanted to worship her until she couldn’t take another moment of pleasure. It was only when the horses shifted that they both drew apart. They sat looking at one another, and neither was sure what to say. Edward stroked the downy skin of her cheek and tucked hairs that came loose behind her ears. The longer he sat holding her in his lap, the more his previous anger resurged. His heart hadn’t slowed, and he recalled why he pulled her from her saddle and kissed her senseless.

A spinster lady in waiting…

After four broken betrothals, Elizabeth Fraser believes her father’s political ambitions will keep her from ever finding a husband. Content to be considered on the shelf, Elizabeth would rather be left in peace as one of the queen’s ladies in waiting than engage in flirtations that lead nowhere. She never expected one chance encounter months ago would alter the future she had accepted.

Will Elizabeth give Edward a second chance to prove he wants more than a dalliance?

A warrior wanting to return home…

Edward Bruce, the adopted younger brother of King Robert the Bruce, is tired of fighting the English in Ireland. Loyal to his brother but homesick, Edward returns to Robert’s Scottish court in hopes of settling down once more in the Highlands. Edward recognizes the beguiling Lady Elizabeth from a brief meeting that involved one dance and a rushed conversation on the terrace. He still can’t believe the rumor she started to protect her friends. Drawn to her dry whit and independent nature, Edward realizes that his new home will require one particular lady of the keep.

Can Edward prove to his Highland lady that his intentions are sincere before time runs out?

When Elizabeth and Edward realize their lives are in danger, they must rely on the Sinclair brothers and their wives to help them investigate who might want them dead. Courtly intrigue follows them as their new love blooms and a home in the Highlands calls to them.

Welcome to Robert the Bruce’s Highland Court, where the ladies in waiting are a mixture of fire and ice. The Highland Ladies, spin off series from Celeste Barclay’s The Clan Sinclair series, returns to the Medieval royal court for love and intrigue. A Spinster at the Highland Court is the much requested and highly anticipated story of Elizabeth Fraser who appeared in both His Highland Pledge and His Highland Surprise. She finally has her own steamy love story and HEA. This a full length novel.  The novella previously appeared in the Once Upon a Christmas Wedding anthology.

Celeste Barclay, a nom de plume, lives near the Southern California coast with her husband and sons. Growing up in the Midwest, Celeste enjoyed spending as much time in and on the water as she could. Now she lives near the beach. She’s an avid swimmer, a hopeful future surfer, and a former rower. When she’s not writing, she’s working or being a mom.