Welcome to Medieval Monday and week five of our bad boy theme!. This week’s guest is Barbara Bettis who is sharing a snippet from her story For This Knight Only. Happy reading and enjoy, my lovelies! 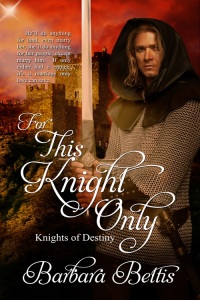 Waiting for the king’s brother seemed to be Paxton’s lot in life. And waiting for him to speak now rated worse than facing a trio of soldiers on the battlefield. He could at least defend himself there.

“Did any of Cantleigh’s men survive?” The sudden sound of the prince’s voice made

“None of those with him.”

For This Knight Only
by Barbara Bettis

To brush up on last week’s installment, visit me on Bambi Lynn’s blog and comment to be entering in a drawing for a free ebook. https://bambilynnblog.wordpress.com

Follow along on Ruth A. Casie’s blog next week and comment to be entering in a drawing for a free ebook https://ruthacasie.blogspot.com/