Today on First Kiss Friday, I’m giving you the first kiss scene from my upcoming novella The Earl Takes A Wife that is in the Bluestocking Belles’ box set Valentines From Bath. In this scene, Adrian de Courtenay has just given Lady Celia Lacey a necklace for her birthday while they are outside on her uncle’s balcony. Be sure to read all the way to the end to learn about my giveaway and happy reading! 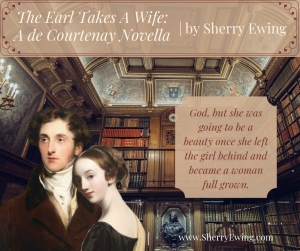 Her impulse to bend forward to kiss Adrian’s cheek may have been an innocent enough gesture in her mind, yet her heart apparently thought differently, given its rapid rhythm. Could he hear the staccato sound that betrayed her feelings for him whether she voiced them aloud or not? Surely he could, since he was standing so close. Was she the only one who felt as though the world was tipping, as if his mere presence made her head spin?

She should step away. She should distance herself from the man who caused such reckless behavior. She should mumble an apology and flee into the ballroom as fast as her slippered feet could carry her.

Yet here she stood, even daring to step closer when she felt the slightest pull from Adrian’s hand on her elbow. It was so subtle that Celia could easily mistake such a harmless touch as nothing. Instead, she hoped he desired her closer. Her reaction to the gift may have been her undoing. She was unsure her heart could stand much more.

He took several steps backward, plunging himself into the shadows of the night, but not releasing her hand. Fool that she was, Celia willingly followed his lead. Not caring she was no longer in sight of those who may be watching, her spirits soared knowing Adrian… yes, Adrian… wanted to steal a few moments alone together.

Had she not dreamed of this moment for months since they were first introduced at Hollystone Hall? His sister Miranda’s words that Celia should make Adrian jealous in order to win him were but a small memory. She had told Miranda months ago that she could not resort to such a ploy and such unladylike behavior, that it was not becoming of a genteel lady. Miranda had laughed, telling Celia sometimes harsh measures were needed in order to obtain what the heart desired. 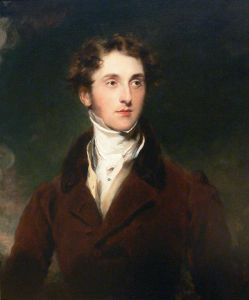 Clearly such foolery had not been necessary, because here she was with Adrian. He led her into the dark of his own accord and not because she made him jealous with another. A brief glimpse of the marquis flashed in her mind, but she brushed away the image of his face, knowing she had made no commitment to the man despite her father’s wishes. Phillip did not own her heart, and he never would. It belonged to Adrian from the first moment she had seen him.

Lost in her thoughts, Celia realized they had not gone far, and for that, she was grateful. She could still easily make a hasty escape if necessary, especially if they heard someone approaching.

Adrian gently maneuvered her against the brick of the manor in the shelter of a trellis filled with ivy vines. He placed his body as a protective shield so she was efficiently hidden. Her mind worked furiously. Had he done this before with some other willing lady? Was she just another conquest?

His long fingers reached out and took her chin, tilting her face upward so she could do nothing more than stare into those mesmerizing blue eyes. The corners of his mouth lifted into a sensual grin, and Celia was lost to everything but him.

She blurted his name as though they were already lovers and felt a blush color her face crimson, hoping he could not see it in the dim light. Her hands moved of their own accord to tentatively touch his waist. At her apparent encouragement, he stepped even closer until she could feel the very heat of him against her young trembling body. His hand slid to her cheek; the thumb rubbed a gentle pattern as if to calm her, but she was anything but calm. The anticipation of his kiss was going to kill her.

A heavy sigh escaped him. “You should leave.” His voice was strained as though he was struggling within himself.

“Yes… I probably should.” Her hands crept upward to finger the buttons of his waistcoat, the floral pattern in deep contrast to the rest of his dark attire. A mental image from her dreams of undressing Adrian on their wedding night startled her, and she quickly shifted her hands to the edge of his jacket as if holding onto him might give her strength and the support she needed to remain level headed.

His breath was warm against her temple when he placed a soft kiss at her hairline before he touched his forehead to her own.

“You are not leaving,” he murmured, his hands moving down her arms as if she needed warming. His voice was low and husky, causing her flesh to shiver in anticipation of the unknown.

“I cannot,” she managed to croak out, while she tried to find a way to breathe. Somewhere in the recesses of her mind she knew she must flee but she ignored the warning, especially when her stomach flipped as his arm swooped around her waist.

“Why not?” he asked, pulling her closer so there was no doubt left in her mind that he wanted her. She may be young, but she certainly understood the fundamentals of what might happen when she took the hand of a rake and plunged into the coolness of the night. 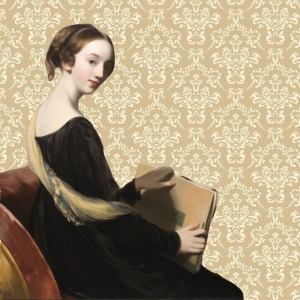 Celia wound her arms around his neck, touching the curling edges of his brown hair. God only knew how much she had been dying to do that since Hollystone Hall. She swallowed hard and rushed onward, her fate sealed to this man whether he knew it or not. “Because I have dreamed of your kisses from the day we first met,” she confessed, her words louder than she intended, as though such an admission should be shouted for all the world to hear.

Adrian muttered something beneath his breath before he gave her a little shake. “I made you a promise I would behave as a gentleman,” he growled. But he did not let her go, and his face showed an internal struggle.

His voice made her shiver yet again, but she kept her place within his embrace. “I would expect nothing less.”

He took her face into the palms of his hands in order to study her reaction to his touch. She covered one of his hands with her own. “If we stay out here, I have no doubt I will break my vow,” he replied.

“Then, before I lose my nerve to ask you…” Celia hesitated only an instant before she rushed on in an urgent plea, “…kiss me, Adrian. Kiss me like—”

…you love me, she finished inside her head when he cut off her words; for she could not speak when Adrian did just that. Kissed her. Right there. In the moonlight. With half of Society but a breath away.

His kiss was demanding at first. She had no idea what to do with her mouth, since this was her very first kiss. He must have realized that fact because everything changed between them. He softened his lips on hers as he possessed her mouth, but still, their situation was charged with an unseen energy that Celia never wanted to end.

Unsure what to do, she at first stood as still as one of the marble statues in her uncle’s garden. A gentle urging from Adrian encouraged her to open her mouth and follow his lead. A willing pupil, she allowed the master to teach her what he enjoyed, and she discovered that she enjoyed it, too.

He easily slipped his tongue inside. Warm fire erupted in her veins, while her tongue tangled with his. A low moan escaped her, unbidden but easily detected in the silence of the night. A tell-tale sign of the true depth of her feelings for the man who kissed her senseless.

Nothing had ever prepared her for the heady rush of sensations that enveloped her whole being. His arms tightened around her. She clutched at him like she was starving, and only Adrian could satisfy her cravings. Nothing mattered. Not the ball. Not her sisters. Not Phillip. Not even her father. If Adrian could kiss her like this, then surely he, too, must care for her. Did he love…?

They tore their lips apart as the sound of her name continued to echo off into the night. Her breathing heavy, she melted into Adrian’s arms, placing her head upon his chest while she heard his own heartbeat running wild. He was just as affected as she was. 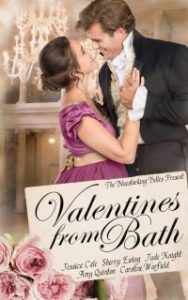 My contribution to Valentines From Bath is The Earl Takes A Wife.

It began with a memory, etched in the heart.

Lady Celia Lacey is too young for a husband, especially man-about-town Lord Adrian de Courtenay. But when she meets him at a house party, she falls in love and cannot get him out of her mind. Will he ever think she is old enough to become his wife?

Adrian finds the appealing innocent impossible to forget, though she is barely out of the schoolroom and a relative by marriage. If they are constantly in each other’s company, then how can he move on without her?

His sister’s deceptions bring them together, but destroys their happiness. Can they reach past the hurt to the love that still burns?

The Master of Ceremonies announces a great ball to be held on Valentine’s Day in the Upper Assembly Rooms of Bath. Ladies of the highest rank—and some who wish they were—scheme, prepare, and compete to make best use of the opportunity. Dukes, earls, tradesmen, and the occasional charlatan are alert to the possibilities as the event draws nigh.

But anything can happen in the magic of music and candlelight as couples dance, flirt, and open themselves to romantic possibilities. Problems and conflict may just fade away at a Valentine’s Day Ball.

If you haven’t signed up for my newsletter, here’s your chance along with joining my Facebook Street Team! Be sure to follow me at these social media links:

How about a giveaway? To win an eCopy of A Kiss For Charity that is Grace de Courtenay’s story, leave me a comment and tell me what you’d like to receive this Valentines Day. I’ll generate a random comment on Monday as the winner. Good luck, my lovelies!

23 thoughts on “First Kiss Friday with Sherry Ewing & a giveaway~”