I have a double treat for you today, my lovelies. Please help me welcome my friend Judith Sterling on a special post just for you. Today Judith is sharing a scene from The Cauldron Stirred along with offering a giveaway to a lucky person who leaves her a comment. She also has The Stone Awakened releasing December 19th so be sure to grab yourself a copy! Read on and enjoy! 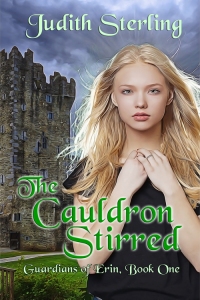 Excerpt for The Cauldron Stirred:

The night air was deliciously cool. Moonlight and darkness held equal sway over the backyard thanks to the shifting clouds. I dashed across the lawn and halted in the exact spot where Aengus had stood. Panting, I looked around, willing some kind of clue to materialize.

The ruins in front of me darkened as large, heavy clouds swallowed the moon whole. The wind tugged at my long, loose hair and pajamas. Tiny raindrops spattered on my nose and cheeks. I turned my palms to the sky, and cold rain pelted them.

“Great.” Intending to return to the house, I swiveled around.

I gasped. My right hand flew to my chest. “Aengus?!”

The man himself stood an arm’s length in front of me. “Why are you here?”

“You scared the crap out of me!”

The strident sound came from the ruins. I whirled around and stared at the dark keep.

Aengus grabbed me from behind. He pulled me to him and wrapped his arms around me. I reveled in the feel of his taut body, of his warm flesh against mine.

Suddenly, everything changed. The rain stopped. The wind died. The entire landscape was bathed in the soft hue of twilight. Breasal Castle looked brand spanking new, just as it had during the bizarre dream in which I brought Aengus to the cottage. But this time, I knew I was awake.

Dumbfounded, I gawked at the medieval magnificence before me. I had no idea what had happened and no desire to pull away from his embrace.

His lips brushed my right ear, sending a shiver down my spine. “This way.”

His right arm released me, and his left slid down to my waist. Maintaining body contact the entire time, he steered me toward the stand of oaks on our right.

Once sheltered by the trees, he turned us around so we faced the castle.

“Are we hiding?” I whispered.

“Why? And what just happened?”

Until that moment, I’d forgotten I wore pajamas. Now I was acutely aware of it. Satin was pleasing to the touch, but something told me my attire had nothing to do with his grip on me.

I looked up at him. “Not that I mind, but why are you holding me so close?”

His hand tightened on my waist. “It’s necessary.”

“I don’t suppose you can explain that, either.”

With his gaze locked on the castle, he shook his head. He pressed his right forefinger against his mouth in a silencing gesture. Then he pointed up at the keep.

High on the battlements, the black-haired woman from my dream—and from Branna’s painting—paced back and forth. Her hair whipped about her pale face and slender frame.

She paused beside a gap in the crenelated wall and glared down at the fairy mound. Her colorless lips curled into a sneer. Then her human form morphed into a dark shadow, which fragmented into what seemed a million black particles. They swarmed into the air and shot across the twilit sky, disappearing into the distance.

He nodded. “She’s real, to be sure. Come.” With his arm still hooked around me, he led me out of the woods and toward the fairy mound.

The Cauldron Stirred and The Stone Awakened
by Judith Sterling

Blurb for The Cauldron Stirred (Guardians of Erin, Book One):

Ashling Donoghue never dreamed moving to Ireland would rock her perception of reality and plunge her into a mystery that brings legend to life.

At seventeen, she’s never had a boyfriend, but she feels an immediate connection to Aengus Breasal, the son of the wealthy Irishman who’s invited her family to stay at his Killarney estate.  For the first time in her life, a guy she likes seems attracted to her.

But Aengus is secretive, with good reason.  He and his family are the Tuatha Dé Danann, ageless, mythical guardians adept at shifting between this reality and the magical dimension known as the Otherworld.  Evil forces from that world threaten the Breasals, the Donoghues, and all of Ireland.  Ashling must open her heart, face her fears, and embrace a destiny greater than she could ever have imagined.

Buy at The Wild Rose Press

Buy at Barnes and Noble

Blurb for The Stone Awakened(Guardians of Erin, Book Two) – the one releasing on 12/19:

Since moving to Ireland, Ashling Donoghue has tackled one challenge after another.  Now the mystery of her parents’ disappearance seems unsolvable.  Are they dead or only missing?  No one—not even the godlike Breasals—has a clue.  Hope and fear war inside her, but she’s determined to find answers and stay strong for her siblings.  Even as she hones newfound powers, her banshee-in-training sister Deirdre needs her support.

Ashling could use a little help herself.  She’s struggling to navigate her first romance, and while Aengus Breasal stirs her body, mind, and soul, his nemesis Lorcan does too.  Both men harbor secrets about her past life as Caer.  One has ties to Aoife, the scheming wind demon whose influence is on the rise.

As the Stone of Destiny awakens, so does the conflict within.

Judith Sterling’s love of history and passion for the paranormal infuse everything she writes. Flight of the Raven, Soul of the Wolf, and Shadow of the Swanare part of her medieval romance series, The Novels of Ravenwood. The Cauldron Stirred and The Stone Awakened are part of her young adult paranormal series, Guardians of Erin.  Written under Judith Marshall, her nonfiction books—My Conversations with Angels and Past Lives, Present Stories—have been translated into multiple languages. She has an MA in linguistics and a BA in history, with a minor in British Studies. Born in that sauna called Florida, she craved cooler climes, and once the travel bug bit, she lived in England, Scotland, Sweden, Wisconsin, Virginia, and on the island of Nantucket. She currently lives in Salem, Massachusetts with her husband and their identical twin sons.

17 thoughts on “A new release from Judith Sterling & a giveaway”