On today’s Medieval Monday, I’d like to welcome back my guest Lane McFarland who has a snippet from her novel A King’s Enemies. Don’t you love this cover? Be sure to leave Lane a comment below and happy reading, my lovelies! 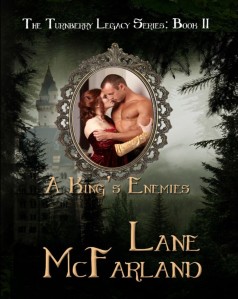 King Edward opened his arms to the crowd. “Eat and celebrate!”

The king sat in the center of the royal dais that dominated the front of the room. Several minstrels blew into flutes while another musician plucked a harp’s strings, competing with the roars of conversation and laughter echoing throughout the great hall.

Someone touched Katherine’s arm. She jumped.

“You caught me daydreaming.”

Hildred’s cloudy gray eyes shone in the twinkling lights of candelabra set about the stately room. “I understand. It wasn’t so long ago when I was a young lady, eyeing the brawny men in court.”

Tormented by King Edward’s brutality against Scottish sympathizers, Drake Fletcher vows revenge, but only a madman single-handedly attacks the Crown. Instead, he enters the royal court as a spy to aid Robert the Bruce’s rise to power and place a formidable leader on Scotland’s throne.

Scottish lass Katherine Mackenzie Armstrong targets three of King Edward’s officers who brutally raped and murdered her mother. Disguised as one of Queen Margaret’s attendants, she sets a course to destroy the men.

The acts of treason both Drake and Katherine commit are punishable by death in The Tower of London but their determination pushes dangerous limits. Considered enemies, they use each other to gain vital information. Neither expect their overwhelming attraction to one another, the staggering emotions stirred. But the closer they become, the more they jeopardize their pledges of vengeance.

Will the weight of retaliation crush them, see them beheaded? Or will Katherine and Drake form an alliance and learn to live and love again?

Follow along next week on Elisabeth Hobbes’ blog at  http://www.elisabethhobbes.co.uk